As predicted by myself and a lone commenter last time I picked up this thread around eighteen months ago, European production of so-called “designer drugs” continues to outstrip the ability of legislation to block them.

Rob Wainwright, Europol’s director, said the emergence of the substances was now a major feature of Europe’s drugs problem: “Organised crime groups are increasingly active in producing and distributing drugs which can be associated with ecstasy,” he said. “We are determined to combat this phenomenon.”

… by any means other than the one simple and obvious way of disconnecting drug production and distribution from criminal gangs, namely decriminalisation, licensed production and regulation. Which is politically unpalatable, of course; so whack-a-mole legislative theatre will have to do instead, I guess. After all, the kids who’ll be harmed by the dodgy chemicals probably haven’t even bothered to register to vote, while the knee-jerk tabloid readers of the middle classes certainly have; gotta sing for the peanut galleries, AMIRITEZ? *sigh*

So, I’ll reiterate my question from the afore-linked previous post on the same topic: Is there anyone among Futurismic‘s readership who can say with a straight face that more restrictive legislation will prevent drug abuse, in the UK or anywhere else? If so, tell us how and why in the comments. Feel free to suggest new alternatives to legislation, as well.

Shades of Eric Shmidt’s deniable childhoods in the news that the European Commission wants to enshrine the right of every citizen to be “forgotten” by the titans of the web, should they so choose. Take it away, Ars Technica:

As part of its newly outlined data protection reform strategy, the EU says it believes individuals have a “right to be forgotten.” That is, people should be able to give informed consent to every site or service that processes their data, and they should also have the right to ask for all of their data to be deleted. If companies don’t comply, the EU wants citizens to be able to sue.

“The protection of personal data is a fundamental right. We need clear and consistent data protection rules,” EU Justice Commissioner Viviane Reding said in a statement.

The new guidelines focus on more than just the right to be forgotten—the EU wants to cover most aspects of an individual’s personal data and how it can be used. For example, rules for how someone’s personal information can be used in a police or criminal justice setting will be changed, as well as how citizens can securely transfer their data to places outside the EU.

A laudable sentiment, but one which I rather suspect will be impossible to enforce in any realistic way. But hey, at least the right to sue will keep all those poor starving lawyers in work, right?

I try to avoid reusing the headlines of articles I link to, but in this case I just had to let The Guardian‘s choice carry through, because it’s just too good to improve upon. The story: there’s an MMORPG in the pipeline that essentially models and recreates the European Parliament.

The game will allow players to gain points and move up levels by proposing legislation, amending laws, writing articles for an online newspaper and other tasks. The developers are in discussions with journalism schools and secondary school teachers to incorporate the game into teaching modules.

The game will allow for fictional pieces of legislation to be crafted and track real bills making their way through the European legislative machine. The game’s developers, the European Service Network, a Brussels communications agency that until now has mostly been responsible for producing EU brochures and websites, saw the popularity of online games such as World of Warcraft and thought they could make a sort of legislative Middle Earth out of the European parliament.

“It’s completely out of the box. It’s an experiment as a means of bringing together the best trends in the internet to stimulate discussion about Europe,” said ESN’s manager of the project, Ahmed ElAmin.

“World of Warcraft was one of the inspirations. It’s the biggest online role-playing game there is. It shows there is a huge audience for 3D online worlds.”

Well, yes, there is a huge audience for online 3D RPGs… but most of them involve goals and rewards of a more visceral kind than ramming through (or blocking) some obscure but important chunk of legislature. And I’m docking you ten points, Mr ElAmin, for your use of “out of the box”. Tsk..

Snark aside, it’s an interesting attempt to open up the mechanics of European democracy to the layman, and I think I’ll be giving it a look at some point (time permitting, natch). But it rather begs the question: once we reach a point where we can simulate a large-scale consensus democracy online, why the hell don’t we abandon the pretense of simulation and let it run that way for real?

Further indications of the corrosive effect of corporatist economics on the nation-state: German politicians suggest to Greece that it balance the books by hocking off a few spare islands and a national monument or two [via BLDGBLOG]:

Alongside austerity measures such as cuts to public sector pay and a freeze on state pensions, why not sell a few uninhabited islands or ancient artefacts, asked Josef Schlarmann, a senior member of Angela Merkel’s Christian Democrats, and Frank Schaeffler, a finance policy expert in the Free Democrats.

The Acropolis and the Parthenon could also fall under the hammer, along with temptingly idyllic Aegean islands still under state ownership, in a rush to keep bankruptcy at bay.

“Those in insolvency have to sell everything they have to pay their creditors,” Schlarmann told Bild newspaper. “Greece owns buildings, companies and uninhabited islands, which could all be used for debt redemption.”

Greece here is being explicitly viewed as a corporation, one whose assets include rights of sovereignty over areas of the planet’s surface which could be valued and sold in order to pay off monetary dets; how short a step is it viewing the corporation as a nation? Let’s say UberMunsterLagerNeu! Schallplatten Gmbh* buys a few of those Greek islands; would they be any more or less a legitimate nation in terms of actual excercisable and enforcable rights than the Dominican Republic, or Sealand? And if so, why?

[ * If you need to ask whether this is a real company name, you probably need a day or two away from the internet. 🙂 ] 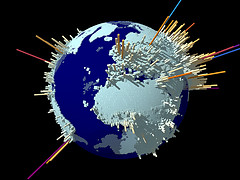