George Dvorsky continues to take advantage of the recent famous-on-the-internet profile of the Kurzweil/Myers beef to bring lesser-discussed aspects of Singularitarianism to the fore… and as someone with an active interest in the movement (not to mention as a science fiction reader), I think that’s a worthwhile thing to do. Like I’ve said before, as way-out as it may still seem to a lot of people, the Singularity is an important concept in our wired world, even if viewed only with the utmost cynicism as a form of eschatological philosophy or techno-cult (which I think is to sell it more than a little short).

So here’s Dvorsky’s non-comprehensive list of notable Singularitarian thinkers — which includes one well-known sf writer, Vernor Vinge, and one person (that I know of, at least) who has been tuckerized as a posthuman ‘species’ in science fiction literature: Hans Moravec, who gave his name to the moravecs of Dan Simmons’ Ilium, an excellent (if challenging and very hefty) novel.

Dvorsky invites suggestions of other thinkers worthy of attention in the fields of Singularity thinking and artificial intelligence, and I’ll extend the same invitation – feel free to include critics and naysayers, provided they tackle the issues with rigour.

And while we’re on the subject, you may or may not already know that PZ Myers has been called in for some serious heart surgery. Just in case it wasn’t already plain: despite not necessarily agreeing with him on matters recently discussed (and sniping at the tone taken), I bear the man no malice, and wish him a speedy recovery. Best of luck, Professor Myers. 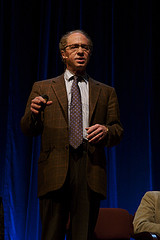 The announcement of Ray Kurzweil’s Singularity University project (and the inevitable backlash against it) has people talking about the S-word again… much to the ire of transhumanist thinkers like Michael Anissimov, who points out that there are three competing ‘schools’ of thinking about the Singularity, each of which hinges on a different interpretation of a word that has, as a result, lost any useful meaning.

The “Accelerating Change” school is probably the closest to Kurzweil’s own philosophy, but it is also Kurzweil’s quasi-religious presentation style (not to mention judicious hand-waving and fact-fudging) that makes it the easiest to attack. [image by null0]

Anissimov finds himself closer to the “Event Horizon” and “Intelligence Explosion” schools:

That may not actually sound any more reassuring than Kurzweil’s exponential curve of change to many people – if not even less so. And with good reason:

That’s the thing about superintelligence that so offends human sensibilities. Its creation would mean that we’re no longer the primary force of influence on our world or light cone. Its funny how people then make the non sequitur that our lack of primacy would immediately mean our subjugation or general unhappiness. This comes from thousands of years of cultural experience of tribes constantly killing each other. Fortunately, superintelligence need not have the crude Darwinian psychology of every organism crafted by biological evolution, so such assumptions do not hold in all cases. Of course, superintelligence might be created with just that selfish psychology, in which case we would likely be destroyed before we even knew what happened. Prolonged wars between beings of qualitatively different processing speeds and intelligence levels is science fiction, not reality.

Superintelligence sounds like a bit of a gamble, then… which is exactly why its proponents suggest we need to study it more vigorously so that – when the inevitable happens – we’re not annihilated by our own creations.

But what’s of relevance here is the sudden attempts by a number of transhumanist and Singularitarian thinkers to distance themselves from Kurzweil’s PT Barnum schtick in search of greater respectability for their less sensationalist ideas. Philosophical schisms have a historical tendency to become messy; while I don’t expect this one to result in bloodshed (although one can’t completely rule out some Strossian techno-jihad played out in near-Earth Orbit a hundred years hence), I think we can expect some heated debate in months to come.