I’ve spotted another specimen of that rare species, the science fiction stage production. And this sounds like an odd specimen indeed: it’s called Boom, and it’s described as a “science fiction fantasy comedy about sex, fish, extinction and the end of the world.” (Via Playbill.)

Boom is a production of Woolly Mammoth, a Washington, D.C., theatre company, now in its 28th season. The play runs November 3 to 30 at Woolly Mammoth Theatre, 641 D Street, NW (7th & D), should you be in the neighborhood and want to take it in.

“Can the apocalypse be the ultimate aphrodisiac? It certainly ups the ante when Jules, a marine biology grad student (Aubrey Deeker), attempts a random hook up through a personal ad that reads ‘Sex to change the course of the world…’ When he gets a response from a randy journalism major named Jo (Kimberly Gilbert), they meet at the subterranean lab where Jules studies fish sleep cycles for signs of impending global doom. This simple online connection quickly moves far beyond casual sex into the realms of ontogeny, phylogeny, evolution and extinction — all overseen by an odd docent-like woman named Barbara (Sarah Marshall). In this provocative sci-fi fantasy, the future of humanity hangs in the balance as irreverent young playwright Peter Sinn Nachtrieb asks: do we control our own fate or is someone else pulling the levers?”

The play is the work of Peter Sinn Nachtrieb, a San Francisco-based playwright whose works include Hunter Gatherers, Colorado, Meaningless and The Amorphous Blob. It’s directed by John Vreeke.

We’ll let Variety have the last word: “SEX!  PLANET-RUINING CATACLYSMS!  LOADS OF BOOZE!  BOOM has all of these things.”

What more could you ask for in an evening’s entertainment?

Horror writers in search of a plot need look no further: a weasel-like predator known as the fisher is making itself right at home in your Northeast or Midwest suburbs! The mixture of eco- and morality tale make it the perfect story device, given that they were almost wiped out by trappers and foresters in the last century, but reintroduced to prey on porcupines. The New York Times describes a householder’s encounter with a fisher that tried to eat her German shepherd’s face:

“I had never seen anything like it,” Ms. Beaudry recalled. “I didn’t know what it was. It kind of looked like a fox. But it was very, very ratty looking and had fangs and claws. It was creepy looking, but not that big.”

More animals-out-of-place news: The Caribbean monk seal, extinct. The Chinook salmon, endangered in the U.S., is thriving so well in Chile and Argentina that it could disrupt freshwater and marine ecosystems. And there’s thumbnail-sized quagga mussels clogging up the Colorado River. What other displaced creatures might be cast in near-future fiction? 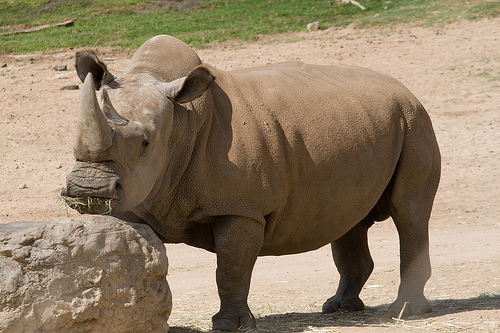 It seems to be a week for biological-related stories here on Futurismic. Using skin cells from the nearly extinct Northern White Rhino, scientists can reprogram them back to an embryonic state, from which they can create sperm and eggs with the animal’s genes. An animal can then be created in vitro or through a surrogate mother from the Southern species of White Rhino. There are only 3 or 4 of the Northern variety left in the wild.

Professor Robert Millar, the director of the Medical Research Council’s Reproductive Sciences Unit at Edinburgh University, who is leading the study, said: “There are a lot of African animals under the threat of extinction. We want to protect their genomes, but you have to protect their habitats as well. This is one of the ways of dealing with the problem, especially when the animals get to such low numbers in the wild. It is a method we need to start to get into place as an insurance policy – it’s clearly do-able according to the laboratory work.”

This poses an extremely interesting moral dilemma. Is it worse to clone an animal or to let its species go extinct? And if the animal was cloned, does that make it a legal member of the species?

[via the Independent, Northern White Rhino in San Diego Zoo picture by Eliya] 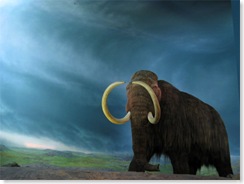 An international research team has discovered that they can obtain good DNA samples from the shafts of mammoth hair. Apparently keratin, the protein out of which hair is made, acts as a kind of plastic, preserving the DNA from contamination by marauding bacteria. The research could help scientists figure out why the mammoths went extinct at the end of the last ice age, and the technique could be applied to samples from other species that went extinct in relatively recent times, even samples that have been tucked away in museum drawers for decades. (Via National Geographic News; tip from The Walrus Said.)

Of course, what everyone really wants to know is, can we use this DNA to bring woolly mammoths back?

Short answer: maybe, but you won’t see them in Siberia’s nascent Pleistocene Park any time soon. (Image from Wikimedia Commons.)