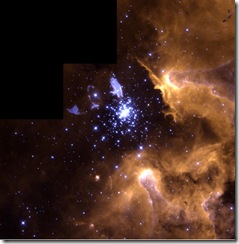 Now that I’m no longer wearing my actor hat and performing eight shows a week of Beauty and the Beast, I’ll be posting regularly again. And what better way to start than with this fascinating article from SEED Magazine about the controversy in SETI (Search for Extra-Terrestrial Intelligence) circles over whether we should just be passively listening for alien civilizations, or actively announcing our presence.

Those opposed to “active” SETI point out that, in effect, we might just be putting up a big neon sign on the planet that says “Come And Get Us” (or possibly “Good Eats!”) if there’s something nasty out there listening. In fact, David Brin pointed out years ago (in this paper on Xenology: check out the section called “The Great Silence”) that one theory (that originated within science fiction) for why we don’t hear signals from other civilizations is that something hunts down and destroys anybody that start broadcasting.

Check out the article, and for more discussion of it, read this post at the blog that I picked up the link from, the always-interesting Centauri Dreams. 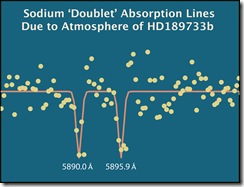 We know there are lots of planets orbiting other stars: we’ve found more than 250 of them already, and we’re getting better at finding them all the time. But the big question is, do any of the obviously plentiful extrasolar planets in the galaxy support life?

So far, we can’t tell: but we’re getting closer to being able to. Dr. Luc Arnold of the CNRS Observatoire de Haute-Provence in France thinks we might be able to tell if an extrasolar planet supports vegetation via a spectral analysis of the light reflected off it, because vegetation absorbs a lot of light around a specific wavelength for use in photosynthesis (on Earth, that’s red light, so this phenomenon is called the Vegetation Red Edge).

We don’t have any Earth or space-based telescopes that are able to carry out spectral analysis fine-grained enough to do this, yet, and even ESA’s Darwin and NASA’s Terrestrial Planet Finder, launching within the next decade or so, won’t be able to–but the next generation of planet-finding spacecraft after that probably will be.

One thing we have managed to do, though, is analyze the atmosphere of an extrasolar planet: a "hot Jupiter" orbiting a star in the constellation Vulpecula. By measuring which wavelengths of light from the planet’s star are absorbed by its atmosphere every time it swings between the star and Earth, University of Texas at Austin astronomer Seth Redfield determined the planet’s atmosphere contains sodium. (Via Universe Today and Universe Today.)

A Personal Note: I apologize for a lack of posts from me over the past little while. As Paul mentioned in his last Friday Free Fiction post, I’m currently in rehearsal for a professional production of Beauty and the Beast, and it’s taking up most of my time. I hope to still manage an occasional post, though, until the show ends December 30, and resume regular posting in the new year.

It’s a tautology to say that Mars isn’t the most friendly environment for human explorers. In addition to the lack of atmosphere, fluctuating temperatures and high levels of cosmic radiation, fierce storms of super-fine Martian dust could present a serious problem for bold pioneers on the Red Planet’s surface. In fact, Mars’ surface is inimical to local lifeforms, too – which is why NASA’s forthcoming Phoenix Lander will be digging beneath the surface in its hunt for indigenous microbial critters.