In a post entitled “The Neuroscience of McGriddles,” Jonah Lehrer (How We Decide; Proust Was a Neuroscientist) samples the “eerily delicious” McDonald’s product and reaches some dark conclusions:

…The most pleasurable thing about the sandwich isn’t the pancake or the bacon: it’s the calories. According to a recent paper in Neuron, the brain also receives rewarding input from metabolic processes that have nothing to do with the tongue. When you eat at McDonald’s, a big part of the pleasure comes from the fact that the food is sustenance, fuel, energy. Even mediocre food is a little rewarding.

Indeed, even mice with an impaired sense of taste still prefer sugar water over both plain water and water with artificial sweetener. “What they enjoyed were the calories.” And humans’ desire for high-calorie food seems based on our evolutionary investment in a large cranium.

This is a troubling idea, since it reveals the very deep biological roots underlying the obesity epidemic. Let’s imagine, for instance, that some genius invented a reduced calorie bacon product that tasted exactly like bacon, except it had 50 percent fewer calories. It would obviously be a great day for civilization. But this research suggests that such a pseudo-bacon product, even though it tasted identical to real bacon, would actually give us much less pleasure. Why? Because it made us less fat. Because energy is inherently delicious. Because we are programmed to enjoy calories.

[Image: brian cors; thanks to Dinosaur Comics for the link: “Food’s neat, you guys!”] 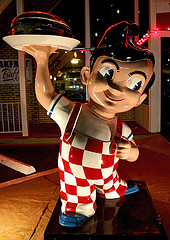 Trying to write an optimistic science fiction story for a change has led to some fascinating research avenues. If we want to give our poor put-upon planet a bit of a break, wouldn’t it make sense to change the way we eat? Think of the fuel we could save, the waste we could cut back on…

Not so fast, though. Former U.S. Food & Drug Administration commissioner (under Clinton and W.) and pediatrician David Kessler says one of the reasons Americans overeat is because the food industry, not unlike tobacco before it, is messing with our minds.

At first glance, that sounds obvious, given the myriad of junk-food choices and the constant blare of advertisement. Kessler digs deeper, though, in his new book The End of Overeating:

“The food the industry is selling is much more powerful than we realized,” he said. “I used to think I ate to feel full. Now I know, we have the science that shows, we’re eating to stimulate ourselves. And so the question is what are we going to do about it?”

In good dramatic fashion, Kessler says it’s partly his fault: when he headed the FDA he won battles for better labeling of processed foods, but didn’t push much for labels in restaurants.

His own dumpster-diving research (note to Hollywood: this book needs to be a movie) led him to the conclusion that not only are seemingly healthy menu choices like grilled chicken or spinach dip larded with “fat on fat on salt on sugar on fat on fat,” but that they are more or less deliberately designed to goad you brain into craving more, even when your stomach has had more than enough. He estimates that 15% of the U.S. population is vulnerable to “conditioned overeating.”

(And everytime I visit another country I see more U.S.-based food chains — sorry about that, but I’m guessing this is not just an issue for my own country.)

Willpower, yes; government oversight, maybe, says Kessler. Far better to change the way we look at food – to break the emotional association with good times. Perceptions have changed for the better before this, he points out: consider shifting attitudes towards cigarettes, driving without a seat belt, or drunk driving.

By now some readers are thinking “That’s obvious,” or rolling their eyes at the prospect of more nanny-statism. (I did both.) Skepticism is healthy, too. For starters, I’d like to know more about the neuroscience of those “reward circuits.” Here’s a taste, though:

Yale University neuroscientist Dana Small had hypereaters smell chocolate and taste a chocolate milkshake inside a brain-scanning MRI machine. Rather than getting used to the aroma, as is normal, hypereaters found the smell more tantalizing with time. And drinking the milkshake didn’t satisfy. The reward-anticipating region of their brains stayed switched on, so that another brain area couldn’t say, “Enough!”

You can hear some NPR interviews with Kessler here, there, and everywhere.