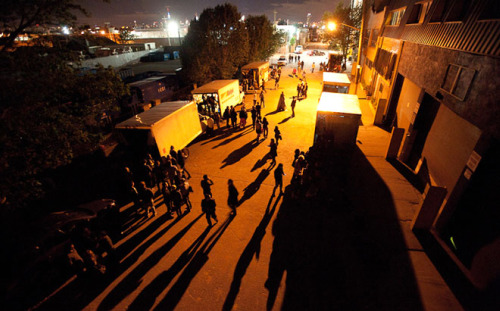 This year’s Sci-Fi London film festival is the ninth event to bear the name. Running from Wednesday 28th April through Monday 3rd May 2010, and themed around the concept of “life in 2050”, it promises an even bigger line-up of world premieres and screenings of new, rare and obscure science fiction cinema from around the world than ever before. But in addition to all that celluloid goodness, there’s lots of other stuff going on, giving Sci-Fi London something of the feel of a more traditional science fiction convention (if that’s not a complete oxymoron).

For instance, the Arthur C Clarke Award ceremony is held early in the week of the festival, and this year (should you be lucky enough to get an invite) you’ll get to find out whether China Mieville gets to take home the prize a second time. But there are also numerous workshops and discussion panels going on over the course of the week, and I’m very proud to be able to say that yours truly has been invited to take part in some of them.

The full programme can be found on the Sci-Fi London website, of course, but in the interests of mild self-aggrandizement, here are the four panels I’m involved with:

If the topics for discussion look familiar, well, there’s a reason for that: I sent the Sci-Fi London organisers a bunch of ideas based on discussions we’ve had here at Futurismic, and they liked some of them so much that they decided to saddle me with steering the conversations in question… how’s that for karma, eh?

In fact, I’m rather awed by some of the pundits and thinkers I’ll be appearing with – that Faith Wars panel features not only the afore-mentioned China Mieville, but also Ruth Gledhill, the religion correspondant for The Times; Steve Fuller, Professor of Sociology at the University of Warwick; and Andrew Copson, Chief Executive of the British Humanist Association. It promises to be a lively (if not outright contentious) debate, that’s for certain, and I’m really looking forward to it.

(Although, to be honest, I’m also bricking it somewhat; one opinionated and scruffy webzine publisher attempting to ride herd on four super-sharp intellectuals should be a sight worth seeing, if only for the LULZ. Maybe they’ll video it, then screen it at next year’s festival? Be sure to bring popcorn!)

So, if you’re in or around London at the turn of the month, there’s no shortage of interesting diversions for the science fiction aficionado over the weekend – it’d be excellent to see some of you there. 🙂