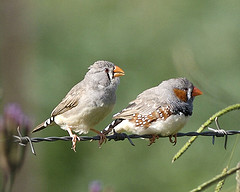 It sometimes feels like you can’t go two weeks without some new aspect of human life or behaviour being declared as being related to our DNA. The latest attempted conquest of genetic determinism? Why, our very culture itself!

You see, male zebra finches usually learn their courtship song patterns from their fathers, but it turns out they can generate the same songs spontaneously after a few generations without influence:

“It’s the classic ‘chicken and the egg’ puzzle,” Mitra said. “Learning may explain how the son copies its father’s song, but it doesn’t explain the origin of the father’s song.”

Mitra’s team wanted to find out what would happen if an isolated bird raised his own colony. As expected, birds raised in soundproof boxes grew up to sing cacophonous songs.

But then scientists let the isolated birds give voice lessons to a new round of hatchlings. They found that the young males imitated the songs — but they tweaked them slightly, bringing the structure closer to that of songs sung in the wild. When these birds grew up and became tutors, their pupils’ song continue to conform, with tweaks.

After three to four generations, the teachers were producing strapping young finches that belted out normal-sounding songs.

Uhm. Well, if you’re thinking that seems a little tenuous, you’re not alone:

Mitra admits that the analogies between bird culture and human culture are tenuous. “But there are resemblances. Culture is just learned behaviors. The motivating scenario is, if you isolate human babies from culture, put them on an island and come back after a few generations, what would their culture be like? What sort of language would they have? What sort of politics would evolve?”

That experiment probably won’t take place in the near future. In the meantime, Fitch says we can learn valuable lessons about human culture from songbirds, both at theoretical and mechanistic levels.

“Social learning is shared between the two, and songbirds are a well-understood and experimentally tractable system,” he said. “These biologically-grounded studies will lead us beyond the tired ‘nature versus nurture’ or ‘biology versus culture’ dichotomies which dominate the social sciences today.”

With the caveat that I’m not a geneticist or behavioural scientist, I don’t really see how birdsong and human politics are supposed to be different expressions of the same thing; the former is a biological imperative, while the latter is an emergent phenomenon. As Brian Eno once said, “culture is everything we don’t have to do”; a zebra finch that doesn’t sing sweetly won’t pass on its DNA, making its songcraft a matter of reproductive necessity, but I don’t think you can declare the same thing about, say, a great human painter or poet or politician.

That said, I’m all for getting beyond the nature/nurture dichotomy – knowing how culture emerges from biology is one of the most tempting grails of knowledge I can imagine. But in the same way that everything from alcoholism to sexuality seems to be blithely written off as being primarily a function of our genetic code, declaring such a nebulous and complex phenomenon as human culture to be passed along by DNA on the basis of some songbird studies seems… well, it seems pretty daft, really.

If there’s someone in the audience who can set me straight on this subject, I’d be very glad for them to speak up and tell me where my reasoning is wrong, but this story seems to me like just another instalment in our ongoing fetish with genetics as the key to all unsolved mysteries. [image by Lip Kee]