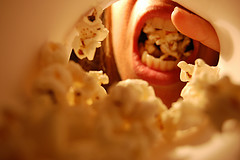 Spare a thought for poor old Hollywood; it seems that no matter how much they spuff away on CGI budgets and celebrity actor’s fees, they just can’t keep us as at a perpetual peak of emotional engagement. They could spend more money on better writers, of course… but what do they know about audience engagement and emotional response, eh? [image by serendipitys]

No, no – far better to use a technological fix to replace the flawed human responses of the traditional focus group. So how’s about we wire test viewers up to an fMRI unit and watch how their brains respond to the latest batch of daily rushes? That way we can learn how to keep the grey matter revving at the red line for 120 minutes at a time…

MindSign has already helped advertisers dial in their commercials’ second-by-second noggin delight and has even assisted studios in refining movie trailers and TV spots […] Now the company wants to replace that ancient analog heuristic, the dreaded focus group. Carlsen claims that focus group members not only misrepresent the likes and dislikes of the broader population — they can’t even articulate their own preferences. Often, they’ll tell a human researcher one thing while the fMRI reveals they’re feeling the opposite.

See, it’s all our fault – if we didn’t lie to Hollywood executives, they’d make better movies! They’re only trying to help!

Neurocinema helpfully speeds up a process Hollywood began years ago, namely the elimination of all subjectivity in favor of sheer push-button sensation. By quantifying which set pieces, character moments, and other modular film packets really lather up my gray matter, the adfotainment-industrial complex can quickly and efficiently deliver what I actually want. Movies won’t be “made,” they’ll be generated. Michael Bay, with access to my innermost circuitry, can really get in there and noogie the ol’ pleasure center. And here’s the best part: Once the biz knows what I want, it can give me more of the same. I’ll soon be reporting levels of consumer satisfaction previously known only to drug abusers. My moviegoing life will, literally and figuratively, be all about the next hit.

You see? You can’t ask for what you really want, because you don’t actually know what you want!

“But now movies will be more formulaic than ever!” purists whine. Au contraire, aesthete scum. “Formula” is for suckers. It implies narrative — peaks and valleys. What MindSign seems to be offering is a new model — not formulaic, but fractal. Forget ups and downs, suspense and release. What if every moment were a spike, every scene “trailer-able”? In fact, movies will become essentially a series of trailers, which, incidentally, are far better-loved than the oft-crummy features they encapsulate. Movie houses will become crack dens with cup holders, and I’ll lie there mainlining pure viewing pleasure for hours. Why not? I can’t decide what I want to watch anyway. Luckily, Hollywood is there to make those tough choices for me. And to show me the zombie shark I never even knew I was dying to see.

Looks like I have a closing argument for that debate I had last night with my girlfriend over whether we should invest in annual cinema passes. I’ve got more story stashed on a three inch stretch of my bookcases than Hollywood has strained out in the last few years… and if I stay home, I don’t need to take out a mortgage in order to get myself a soft drink.

Sarcasm aside, the prospect of neurally-optimised cinema is kind of intriguing, even though it does foreshadow a final forking of the road between spectacle and storytelling. Rather than going to see a simple tale of boy-meets-girl (or airhead-becomes-trial-lawyer, or blue-elves-get-saved-by-compassionate-corporatism), why not just go and plug your eyeballs into two hours of refined emotional sugar… or amphetamines, or sedatives, a blend of all three, whatever’s your poison. (I guess the Saw franchise really is ahead of the curve after all, having exchanged the last vestiges of plot for visceral button-pushing that caters explicitly to the intensely desensitised.)

Step on a bit further, and the interactive movie concept that’s been batted around for years becomes not just possible but necessary – once you’ve optimised for a whole demographic, the only route forward is to optimise on a per-viewer basis, spooling out selected scenes and vignettes in direct response to the brainspikes of the individual, who could also nudge the flow of spectacle in the direction of whatever emotional response they feel they want from moment to moment. That’d be tricky to do on a big screen for a few hundred people at once, of course (though there’s probably some sort of augmented-reality cyberspex solution to that problem, if you can be bothered to look), but by the time it’s a viable commercial technology, “going to the cinema” will sound as old-fashioned as waltzing to a Wurlitzer at a tea-dance.

I honestly can’t bring myself to mourn that much.