K Tempest Bradford has identified a problem that many webzine editors have, but that most of them (myself included) have neither the time, money or 1337 code sk1llz0rz to solve alone: our readers would probably really appreciate downloadable ebook versions of our content, and an easy mechanism for delivery of such.

These are the core issues Tempest has identified thus far:

If you’re involved in the clever coding side of things (professionally or otherwise), and/or you’re a regular reader of webzines who’d like to help them out, maybe you could drop a comment over at Tempest’s post so she can coordinate the expertise on offer?

As for here, I’d be interested to hear from the Futurismic regulars: would you be interested in a convenient monthly EPUB bundle of Futurismic content (say the fiction piece, all columns, and a selection of the more popular blog posts)? What device would you read it on? What channels do you use for getting content of this type already? Would you be willing to pay a small fee for that convenience and portability (not to mention a version of the site that would be ad-free)? 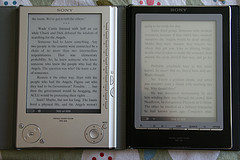 Sticking with the piracy theme for a moment (yeah, I know, so out of character, right?), here’s an article at TechRadar that features an interview with one George Walkley, head of digital developments for publishers Hachette UK, talking about ways in which the publishing industry has tried to learn from the spectacular blunders and ostrich impressions of the music recording industry – the issue of file format compatibility, for instance. [image by Eirik Newth]

Digital downloads weren’t cheaper than CDs, and for now at least ebooks probably won’t be cheaper than print. That’s partly because most of the costs apply whether you publish a book on paper or on an iPhone, and it’s partly because of tax: “printed matter” books are zero rated for VAT, whereas electronic ones have to charge the full 17.5%.

It’s a weird anomaly, and if we were in the book business we’d be lobbying Alistair Darling like crazy to get electronic books treated the same as printed ones.

The challenge for publishing is to avoid being seen as greedy. In music, the debate quickly became characterised as The Man versus The Kids, where The Man was Bono, his celebrity mates and their filthy rich record companies.

In reality, most musicians are struggling to pay the rent, but that’s not what the average file sharer thinks.

This is very true… as is the article’s revelation that the book-buyer demographic and the music pirate demographic are very very different. But as a side note, I’d point out that almost all musicians (and, I suspect, the vast majority of novelists) have been struggling to pay the rent for decades, and that the exceptions to that norm – the Bonos and McCartneys and Rowlings of the world – have been enthroned on their disproportionate mountains of cash by the same business models that are now collapsing under the pressure of filesharing.

I’d even go so far as to say that the business models in question have gone some distance toward ensuring that the smaller names in music and writing can’t make a reasonable living wage at it; if there’s [x] amount of money sloshing round in the economy that people are willing to spend on entertainment, then the way that money is divided up between the entertainers is controlled by the distribution and publicity systems of the industries that publish them.

The utopian promise of The Long Tail is that the more obscure artists will have a better chance of being discovered by readers or listeners who will enjoy (and hence purchase) their work, while the megastars will wane to a more modest brightness as the monopoly control their publishers had over the formerly-limited channels of publicity and sales frontage is eroded. Whether that utopia arrives or not remains to be seen; personally, I think we’re headed in that direction, but it will take hard work from the publishers to avoid creating the black-market demand that buried the big record labels. I want to see the artists I enjoy get paid, and I’m happy to pay them… but the price has to be right, as does the share that goes to the creator. Walkley is wise to this, it seems:

“Copyright infringement cannot be prevented altogether, only reduced,” he says. Speaking personally, he says he’d like to see action against the most egregious offenders – but he also says that the key is to give consumers what they want.

“One of the most important things we can do is to make the purchase of legitimate ebooks as easy and as convenient as possible and produce a broad range of titles in digital formats,” Walkley says. It’s a lesson that took the music industry more than a decade to learn.

Amen. And right on the tail of that article comes an announcement from Amazon, wherein they try to sweeten the deal on Kindle-based ebook pricing for publishers:

Delivery costs will be based on file size and pricing will be $0.15/MB. At today’s median DTP file size of 368KB, delivery costs would be less than $0.06 per unit sold. This new program can thus enable authors and publishers to make more money on every sale. For example, on an $8.99 book an author would make $3.15 with the standard option, and $6.25 with the new 70 percent option.

It’s a generous offer, but it looks to me like Amazon wants to be the iTunes of books – which is an understandable business goal, certainly, but hinges on locking publishers and consumers alike into one proprietary and intrinsically limited hardware platform. I suspect that once Steve Jobs has delivered his next sermon to the Fapple faithful, and the much-vaunted Tablet paves the way for cheaper and more open equivalent hardware, the range of affordable and open devices upon which ebooks can be read comfortably will mushroom.

Will the publishers be ready with the right formats at the right price? Will the book-buying demographic be more willing to compromise than the BitTorrent kids? I guess we’ll just have to wait and see.

[ Full disclosure: I have done freelance work for Hachette UK, and George Walkley is an acquaintance of mine. ]

If you check out Futurismic‘s Friday Free Fiction posts, you’ll have noticed that we link regularly to FeedBooks, a site that aims to supply free-to-read ebooks in convenient portable formats. FeedBooks themselves have noticed, and we’ve been working with them to make Futurismic‘s fiction more accessible.

All stories published here at Futurismic are released under a Creative Commons license, so anyone can republish them provided they credit the authors and make no profit in the process. FeedBooks make stories more useful to the reader on the move by making them available in portable device-friendly formats like ePub, MobiPocket and iLiad, as well as printable PDFs.

So, if you keep an eye on the special Futurismic list at FeedBooks, you’ll see our back catalogue of fiction cropping up as time goes by. New stories will remain exclusive to Futurismic for the first three months, after which you’ll be able to pick them up in whatever format suits you best. The following titles are already available, with more to come in the future:

The FeedBooks team seem genuinely interested in getting good fiction into the hands of readers, and I recommend getting in touch with them if your webzine operates a similar model to Futurismic – it’s a great way to give your authors greater exposure. 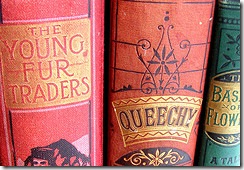 I’m out of town and away from the interwebs today (at a conference about Web2.0 in libraries, ironically enough), so I’ve left you these articles to chew over using the magic of scheduled posting. [image by Tom Maisey]

First off, David Louis Edelman repeats the oft-heard assertion that the novel will die, but he doesn’t see it as a downer:

“Very soon we’re going to have a medium for distributing the written word that’s not only easier but better suited to the task than books. So let’s dispense with the silly, sentimental arguments you often hear about why storytelling is never going to go electronic. “You can’t replace the feeling of a holding a book,” “I don’t like reading on a screen,” and “I can’t read an e-book in the bathtub” are some of the sillier excuses you hear all the time for why printed books are going to survive until the end of time.

I’m sorry, but “I can hold my entire library in my hand,” “I can download new books at will,” “I can search my entire library in a nanosecond,” “I can instantly send books to my friends,” “I can translate and define words on the fly,” and “I don’t have to devote an entire room of my house to holding my books” are going to trump reading in the bathtub any day of the week.”

Well worth a read. Now compare and correlate with Jason Stoddard’s recent posts on the future of creative writing … start with this one about creating fully featured alternate realities:

“What do you think this is? This is 100% writing – and this is some of the most powerful writing you can do. Instead of blogging about your dogs and your vacation schedule or how the world is going to hell to create a post every day, turn some of that energy towards this!”

And then move forwards chronologically through the next four posts or so.

And then … discuss, be you writer or reader!