The good folk at BERG have clipped out the master graphic from the Gartner Hype Cycle Report for 2011 (the full version of which I’m too tight to pay for, I’m afraid); see below. 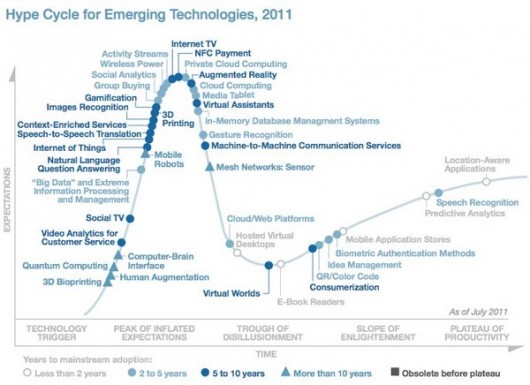 Rolling around like a marble in the trough of disillusionment are virtual worlds, ebook readers and QR codes, which is interesting; I’d have thought that -at least from the consumer side – the ebook reader was well out of the trough and climbing forwards. Looks very different from Publisherville, though, which might explain it…

Meanwhile gamification (which may or may not be bullshit) and 3d printing are just about to hit their frenzied Barnum moment in the techblog spotlight, with AR and cloud computing heading for a comedown mooch in the trough in the company of ‘media tablets’. If that last point means I can pick up a remaindered Android tablet in the post-Xmas/post-market-crash sales, I’m all for it, amiritez?

But speaking of market crashes, how would those points shift if 2012 sees the depression stay flatlined? (Doesn’t exactly seem a preposterous suggestion right now, does it?) Which becomes more interesting or acceptable or tempting when times are even tighter? Which becomes a frivolous cul-de-sac?