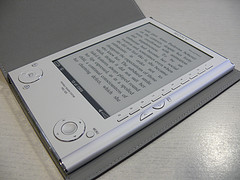 Been considering splashing out on an ebook reader? If so, you’ll be wanting the opinions of someone who isn’t just shilling for the company. While the Kindle seems to get the bulk of the blog coverage, there’s another big-brand competitor out there – and Scots science fiction novelist Gary Gibson seems to be a convert to the church of Sony Reader:

The answer is a very vigorous thumbs-up. I love the bloody thing, despite its many faults. God knows there are enough of them; it crashed from time to time, necessitating sticking a pin in the back to get it to laboriously reboot. Changing pages can occasionally also be a bit slow. It doesn’t come near the stated 7000-pages-before-needing-a-recharge stated in all of Sony’s advertising. And that’s just the hardware. There are endless problems to do with file formats – .lit, .mobi, .epub, and .on and .on and .on. […]

And yet, it’s still the greatest thing. The words are an absolute delight on the screen. It’s remarkably like reading words on paper. The text is clear and sharp. The machine is stunningly sleek and portable. And my reading has gone through the roof; I’ve read more books in the past six months than I’m usually likely to get through in a couple of years, if that. […]

I’ve made a point of being the first to describe the many discouraging issues concerning the technology. I suspect machines like this are really for the hardcore reader like myself; critics are right to point out these are not devices for the kind of people who might read one or two books in a year while on holiday. But for people who like to read, they’re an absolute godsend.

I expect I’m going to wait until the next generation of netbooks have full ebook functionality (I’ve been rammed into penury by sporadic displays of early-adopter syndrome before, a habit I doubtless acquired from my father), but if you’re the sort of person who doesn’t buy a new computer ever eighteen months, but who does tend to read a lot of books… well, are you tempted? Or are you going to stick with print on pulp until it’s pried from your cold dead hands [image by shimgray]