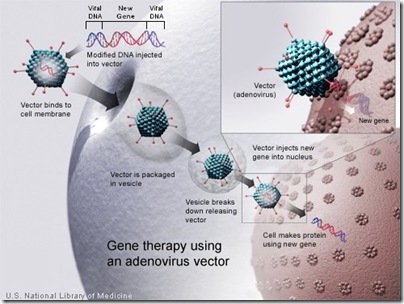 Efforts to genetically modify large animals have been hindered by the fact that the two methods currently used to effect it, somatic cell nuclear transfer or pronuclear injection, are costly, inefficient, difficult, and carry a risk of producing abnormal offspring. Now researchers at the University of Pennsylvania School of Veterinary Medicine have successfully produced genetically modified mice and goats by transferring modified genetic information via a harmless virus to male reproductive cells, which then passed the modification on naturally to about 10 percent of the offspring. In other words, genetic modification via gene therapy.

Of course, using this technique on humans in combination with in-vitro fertilization and careful weeding of the resulting embryos in order to create a genetically modified super race with abilities surpassing normal humans’ would be completely illegal and unethical, and only a deranged science fiction writer such as myself whose next book features genetically modified humans would even think of it as a possibility.

Anyone who, like myself, has suffered indignity and discomfort (and a serious dent to the bank balance) at the hands of the dentistry profession will probably be overjoyed to hear that scientists have discovered a way to cause the regrowth of teeth in mice. This indicates that the ability to regenerate dentition may still be dormant in human DNA as well, which is definitely something to smile about.