This week is apparently International Blog Against Racism Week. During this year’s tumultuous RaceFail debate in the genre fiction community (and other smaller ones before it) I predominantly kept my mouth shut and tried my best to just listen; as far as middle-class white Western privilege goes, my life is pretty much a textbook case, and I’m sufficiently aware of that to know I have very little to add to the discussion that can’t be put far better by others with greater experience (not to mention stronger rhetorical chops).

But silence can seem like complicity, so this seemed like a good moment to come out and nail my colours – and Futurismic‘s, by association – to the metaphorical mast. I do my best to make Futurismic an inclusive place for everyone, regardless of race, gender or sexual orientation; I know I slip up sometimes, and I’ve been grateful to the handful of people who have politely pointed such incidents out to me (and will continue to be so in the future, I hope). My motivations for doing so will remain personal; there are those who may choose to see it as some sort of liberal guilt complex, and they might be right. Frankly, I’d rather live with that than the opposite; my insomnia’s bad enough already.

The important outcome of RaceFail for me – as for many others – was the uncomfortable but important realisation that, despite my best efforts to the contrary, I’m still racist sometimes. We tend to think of racism as an active verb, something that is by definition pursued deliberately, but that’s not necessarily the case. At very deep levels of our culture, we’re conditioned into a worldview that subconsciously reinforces the values of the past, even when we consciously embrace the ethics of the present. I guess you could say that – in what I hope and believe to be the majority of cases, at least within the genre fiction community – we’re racist by accident rather than design.

The good thing about making mistakes is that they give you an opportunity to learn and to improve yourself, if you have the will to do so. When I witnessed my first internet spat about racism in genre literature, I was rather taken aback – first and foremost because science fiction fandom had struck me as the sort of community where racism would be unlikely to occur. After all, it’s the literature of the future, of progress, right? Well, not entirely; I came to fandom quite late in my life, but I still came with a whole load of naivete. I very much suspect I still have a lot of it to lose.

But more recently I’ve come to see RaceFail and similar debates as something that actually confirms genre fiction’s progressive spirit. When I think of the other subcultures I’m closest to – particularly rock music – it becomes obvious that, by comparison, the genre community’s ability to muster enough voices against the status quo to make themselves heard is actually a very rare thing. Rock music is an intrinsically racist and sexist culture; not through deliberate choice in the majority of cases, but because it’s a reflection of its demographic’s attitudes. That peer pressure produces a powerful cultural inertia; try finding a well-trafficked rock music forum online where you can have a debate about the position of women in rock without rapidly being drowned out by posts saying whether or not the postee would consider sleeping with the woman in question. If you do know of one, please let me know about it!

Perhaps it’s because of its comparatively small size, or its long lifespan, or just the fact that it was one of the first fandom communities to really take to the multicast communication platform that is the internet… but I think the genre fiction community should be proud that we have debates like RaceFail. Sure, they can get pretty nasty; people on both sides of the fence tend to get hurt, both personally and professionally, and that’s a shame. But personally I think it’s a good thing that we can fight across that fence – because it means the fence isn’t an unclimable and impermeable wall, as it is elsewhere.

I’m not doing special pleading for fandom here; there are surely many other communities where the same conditions apply, but I can only talk with any validity about those I have experience of. RaceFail doesn’t mean that the genre community can rest on its laurels, safe in the knowledge that it’s more open to debate and dissent on matters of racial and gender privilege than other subcultures; nor does it mean it’s so riddled with entrenched prejudice as to be beyond improvement.

What it means, I guess, is that it’s full of people who care deeply about many different things, but who have a common ground in their love of fantastic stories. It is my hope that this common ground will continue to act as a meeting space where folk on both sides of the debate can discover more about each other as people, as individuals. If anything is ever going to erase racism from our culture – the culture of fandom, and the culture of the world at large – it’ll be getting to know people who are different to ourselves, and coming to realise that difference is something to be celebrated rather than feared.

It won’t happen overnight. Hell, it probably won’t happen in my lifetime, or maybe even longer than that. But I believe every assumption questioned is a step toward the future – that’s science fiction’s message, after all. 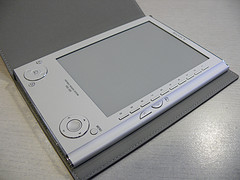 It seems like we’ve been talking a lot about ebooks in the last few months here at Futurismic, which is surely a sign of the times. The thing that’s been bothering me about ebooks for a while (and the principle reason I’ve not really started buying them myself as of yet) is that the pricing has seemed a little… unreasonable. [image by shimgray]

It’s not just me, it would appear. Yesterday, Kassia Krozser of Booksquare laid the boot into publishers trying to gouge the same price from their ebook customers as from their dead-tree buyers:

Let’s go through this one more time: ebooks are a new, different market. You, dear publishers, have been given that rarest of gifts: a new revenue stream (think: home video for the motion picture business). These books are not competition. While there are more than a few readers who would love the luxury of choice of format/style/device when it comes to purchasing and reading books (you’re reading one), the ebook customer is different than the print book customer. Even if your ebook sales are growing by leaps and bounds each quarter, they’re nowhere near the volume that print achieves.

You’re dealing with a different animal, and — wahoo! — you now have the opportunity to change how you do business. Let’s start with smarter pricing. No, let’s start with the idea that you, publishers, are not the only game in town.

Tough love indeed. However, hot on the heels of Ms Krozser’s screed (and far too close to have been a response to it, I might add) came an announcement at SF Signal: genre fiction publishers Orbit are now offering a different ebook from their backlist each month for just US$1.

Now, this is still far from ideal; it’s just a handful of titles in a handful of formats, and the inevitable and much-loathed DRM is involved. But it’s a start. I suspect as the tough times dig in over the next year, we’ll see the start of a race for the bottom in ebook pricing… especially in the genre scene, which seems to tend toward a more tech-savvy readership.