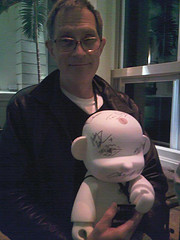 The charming, modest and erudite Geoff Ryman – author of Air, The Child Garden and more, plus the progenitor of the still-divisive Mundane SF manifesto – gets his turn in the interview hotseat over at the Nebula Awards website. Here he is explaining what inspired that controversial manifesto:

In 2002 Clarion I saw that a whole kind of SF writer, those whose work was based on science, were increasingly outside the SF and fantasy culture.  I wanted to help get them published and I very suddenly found myself writing The Mundane Manifesto, based on some of the things the guys (and they were guys) had said.  Both about old tropes driving out the new, and also an avoidance of the coming crunch in terms of oil, global warming, overpopulation, and development economics.

Some interesting stuff there, including an admission that Ryman himself may not have been the ideal figurehead for the subgenre. Go read. [photo by Danacea]