The Royal Academy of Engineering says that developed nations are “too reliant” on GPS [via SlashDot]:

While most people equate GPS systems with the tiny screens which get drivers from point A to point B, the report says society’s reliance on the technology goes well beyond that. The Academy says the range of applications using the technology is so vast that without adequate independent backup, signal failure or interference could potentially affect safety systems and other critical parts of the economy.

In the U.K., on top of satellite navigation, GNSS is used for data networks, financial systems, shipping and air transport, agriculture, railways and emergency services. The European Commission recently estimated an €800 billion ($1.1 trillion US) chunk of the European economy is already dependent on GNSS.

The vulnerabilities in these systems, the Academy says, could have dire consequences if exposed.

But why worry, right? So long as we keep the satellites maintained, everything will be fine… though we do need to trust in the good will and continuing stability of the US Air Force for that, at least for now.

Well, actually, keeping the satellites running is only part of the game. You see, GPS signals can be jammed pretty easily, and cheaply too [via Jamais Cascio]:

Though illegal to use in the US, UK and many other countries, these low-tech devices can be bought on the internet for as little as $30. Sellers claim they’re for protecting privacy. Since they can block devices that record a vehicle’s movements, they’re popular with truck drivers who don’t want an electronic spy in their cabs. They can also block GPS-based road tolls that are levied via an on-board receiver. Some criminals use them to beat trackers inside stolen cargo. “We originally expected that jammers might be assembled by spotty youths in their bedrooms,” says Last. “But now they’re made in factories in China.”

Last is worried that jammers could cause as much havoc on land as he discovered on the Galatea, and he’s not alone. In November 2010, a NASA-appointed executive committee for “space-based positioning, navigation and timing” warned that jamming devices could cause disaster if activated in cities. It is not known how many are out there, but the panel is concerned that the risk of interference is growing fast. And in future, devices called “spoofers” – which subtly trick GPS receivers into giving false readings – may make the problem even worse…

Repeat after me: Everything Can And Will Be Hacked. But the Royal Academy’s warning is worth considering; we’re at a civilisational stage where a global positioning system is a necessity. The problem with GPS is its hierarchical structure: everything depends on the sats, which are rather hard (and expensive) to maintain. I’m no expert on this sort of thing, but shouldn’t it be possible to build some sort of surface-based network that can achieve a similar result? Some smartphones can do rough positioning by signal triangulation, and I’m betting you could find a way to make that method more effective and widespread for the same budget as a few satellite launches.

That said, there’s a whole lot of the planet that doesn’t have cellphone towers (the oceans, for a start), so ground-based systems are always going to be a crude and limited second-tier fallback… if I was working for a commercial space outfit right now, I’d be keeping the necessity for GPS maintenance on the boardroom whiteboard as a potential revenue stream.

What do you get when you give an Ayn Rand fan a car with GPS, and a surfeit of spare time and money? The world’s largest GPS graffito, that’s what:

It’s a step up from “Kilroy Woz Ere”, I guess. Heck of an epitaph for a nation, though.

This idea for this article started when I was doing some research on prosthetics and came across an article about a wheelchair that can be controlled with brainwaves. That got me thinking about what else we might be doing to use electronics or other implants to manage our interface with the world. This was pretty interesting research: I learned a new word (Geoslavery, or location control), and I got to see that the new wave in implants may not be chips at all. END_OF_DOCUMENT_TOKEN_TO_BE_REPLACED 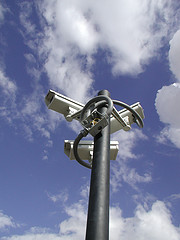 The world may be becoming something of a panopticon, but you can always buy yourself a safe haven… provided you’ve got the necessary cash, of course. Russian billionaire businessman Roman Abramovich isn’t feeling the credit crunch, it seems, as one of the latest additions to his private “yacht” (which looks bigger than most commercial passenger ferries, to be honest) is a laser-screening system for preventing sneaky photography:

The 557-foot boat Eclipse, the price tag of which has almost doubled since original plans were drawn to almost $1.2 billion, set sail this week with a slew of show-off features, from two helipads, two swimming pools and six-foot movie screens in all guest cabins, to a mini-submarine and missile-proof windows to combat piracy.

It might not seem like somebody with such ostentatious tastes would crave privacy, but along with these expensive toys, Ambramovich has installed an anti-paparazzi “shield”. Lasers sweep the surroundings and when they detect a CCD, they fire a bolt of light right at the camera to obliterate any photograph. According to the Times, these don’t run all the time, so friends and guests should still be able to grab snaps. Instead, they will be activated when guards spot the scourge of professional photography, paparazzi, loitering nearby.

Now, you’ll not see me shedding any tears for the poor paparazzi, but that’s some potentially nasty technology right there. For example, the UK government has become obsessively paranoid about photography of late – where might they decide to install something similar? Y’know, to prevent terrorism?

Somewhat further down the financial scale (and hence more accessible to the anxious middle classes), technologies are now available to surveil your own children at all times – like a GPS-enabled wristwatch that will plot your youngster’s location on Google Maps [via SlashDot]:

The watch, which is designed in bright colours to appeal to children, can be tightly fastened to a child’s wrist and sends an alert if forcibly removed.

Parents can see the location of their child on Google maps by clicking ‘where r you’ on a secure website or texting ‘wru’ to a special number. Safe zones can also be programmed with parents being alerted if their child strays outside this zone.

The makers of the num8 watch claim it gives peace of mind to parents and makes children more independent but critics say tagging children like this is a step too far in paranoia about child safety.

File me under the latter bracket, please – although I suppose tracking your kids via GPS is slightly preferable to keeping them shut in the house all the time in response to tabloid-inflated fears about predators. Whichever smart and exploitative bugger manages to mash up this technology with an overlay map of suspected paedophiles will be raking in the money… probably enough to buy a photo-screened yacht. [image by killbox]

Which highlights the real problem, I think – the supposed security of real-time surveillance, and the immunity to it, are both functions of affluence.  Will the gap between rich and poor become increasingly defined by the degree to which one can chose one’s place in the panopticon?