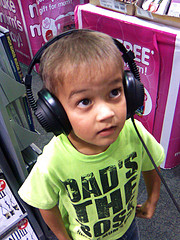 Wired‘s Clive Thompson has an article about some intriguing research into the effects of the “self-fulfilling prophecy” on popularity in art. [image by vagawi]

It’s been known since the 1940s that we base our opinions on the opinions of others at a subconscious level, but modern web applications and social network technology have enabled researchers to quantify and assess the power of the phenomenon with much greater precision. If you’ve ever harboured a suspicion that the runaway success of certain musicians, bands, writers and artists was more down to luck and advertising budgets than any objective measure of quality, it turns out that you may have been at least partially right.

[Watts and Salganik] created a music-downloading Web site. They uploaded 48 songs by unknown bands and got people to log in to the site, listen to the songs, then rate and download them. Users could see one another’s rankings, and they were influenced in roughly the same way self-fulfilling prophecies are supposed to work. That meant some tunes could become hits — and others duds — partly because of social pressure.

Watts and Salganik ran the experiment over and over — each time with a new group of people — until they’d gotten 12,900 participants. In essence, they rewound history each time: Every new group started fresh, listened to the same 48 songs, and made up their collective mind.

The result? Different songs were hits with different groups. A few songs frequently — but not always — hovered near the top, and a few at the bottom. But for most of the tracks, success — or failure — seemed random.

Next, fake the peer feedback and see what happens:

They took the song ratings of one group and inverted them so bottom-ranked music was now at the top. Then they gave these rankings to a fresh set of listeners. In essence, they lied to the new group: They told them that songs that weren’t popular with previous listeners actually were.

The new listeners dutifully took their social cues from the bogus popularity rankings — they ranked the fake-high ones high, even downloading them, while snubbing the fake-low ones. Apparently, flat-out lying works.

But only sometimes. Eventually, some of the previously top-ranked songs began to creep back up, and previously bottom-ranked ones slid down. And people in the upside-down world downloaded fewer songs overall.

So quality matters, but so does luck and public opinion… and the effect of public opinion is magnified as it accumulates. Looking at the pop music charts at the moment, I think we can see the same results being reflected on a much bigger scale: the hegemonic power of restricted channels (radio, MTV) has been eroded by the multiplex narrowcasts of the internet, meaning adventurous listeners are more able and likely to encounter more marginal works. Meanwhile, the body of listeners still following the old channels are left with a selection of product that is increasingly groomed and engineered to appeal to those who bought whatever was selling well last week. End result: a flourishing of small-beer independent artists, and a diminishing market for increasingly predictable (and in some cases desperate) manufactured pop.

But how does this reflect on the seemingly inexplicable runaway successes of the book world – the Dan Browns and Stephenie Meyers? Might more marginal authors have replicated their success if they’d had the same degree of initial exposure, publicity and luck? If so, will the levelling of the artistic playing field promised by the Long Tail eventually start throwing more literary curveballs into the bestseller lists? Or will the same old lottery of chance and recommendation rebuild itself on top of the new networks, leaving objective quality (if any such thing really exists) forever playing diminuendo second fiddle to popularity?

Via those crazy kids at grinding.be comes an article whose writer analyses the culture of social networks and media with the “groupthink” criteria of Irving L Janis, coming to the conclusion that our favourite websites and communication channels may be (gasp!) gathering us into groups where the established and accepted truths remain unquestioned.

It’s not the first time the issue has been raised (and frankly I’ve given it greater credence on those occasions when I’ve seen it on sites who employ a copyeditor and/or whose side-barred “all-time most popular article” isn’t entitled “10 Ways To Have Fun With Boobs”) but my response remains the same: find me a human social construct or communication platform that doesn’t put vague ticks in most of those boxes.

Groupthink is a function of being human; it’s the phenomenon that makes party-based political systems not just possible but debilitatingly pervasive. Do social networks enable groupthink to take root? Sure they do – but I think it’s safe to say they offer more opportunity for dissent and debate than the old centralized broadcast media that they’re replacing ever did. As always, the problem isn’t technology, it’s people.