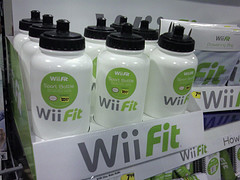 Over at The Guardian, Keith Stuart finds himself distressed by the rise of computer games that focus on physical fitness; his concern is that the whole appeal of computer games has always been the ability to live vicariously as someone other than yourself, and that this development suggests that body fascism is finally invading the game-space. [image by imjoshdotcom]

I understand the physical fitness potential of this procedure, but there are concerns about what this means for the future integration of virtual and physical identities. In the past we’ve been able to entirely separate the two – it’s the fundamental appeal behind online environments such as Second Life. Gaming has always been sort of transcendental – the player’s ability to perform stunning acrobatic leaps in Prince of Persia, or devastating roundhouse kicks in Tekken, has only ever been about hand-eye coordination, about skill. One notable exception was the very first Street Fighter arcade game, now largely overlooked and dismissed by gamers, which required you to punch large pads as hard as possible to pull off moves. It was inexact and clumsy and it created a higher physical baseline for protagonists.

But then fast-forward 20 years, to the unveiling of Microsoft’s Project Natal motion-capture system for the Xbox 360. The demos were all about people pulling off kicks and punches in their living rooms to create similar movements on screen. Going even further, Mylo, the virtual boy emulator created by the British studio Lionhead, will watch and read the player’s facial expressions, with the onscreen character reacting accordingly.

It feels like a strange ontological breach. Watch a gamer in action: it’s a totally unselfconscious activity. Bodies go limp, faces are twisted in weird contortions or slackened in hangdog wonder. Some read this negatively, equating it with the mindless consumption of junk TV – and now it seems even games publishers are developing guilt. And guilt is the emotion that often arises when bodies are scrutinised, especially among the demographic that buys fitness games. Sure there are health benefits to the increasing physicalisation of entertainment software, but there is also the underlying taint of pop-culture body fascism.

I can see where he’s going with this, but I think the point is overstated; rather than developing guilt, I think games designers are in fact responding to an increased demand for ways of making exercise fun. Where the line between wanting to be more healthy and obsessing over your physical persona is drawn is, I suspect, largely an individual matter; I’m absolutely positive that gaming will never develop a significant fraction of the coercive power of television.

This month in Blasphemous Geometries: the life-span of the Bush administration has seen an astonishing proliferation of super hero cinema.

Jonathan McCalmont compares the rhetoric of American foreign and domestic policy with the thematic underpinnings of the super hero movie genre, and explains why he’ll be as glad to see the back of costumed crusaders as he will the back of Bush.

With the Bush era rumbling to a long overdue end, some critics have turned their gin-shortened attentions to the question of which cultural artefact best incapsulates W’s period in office. One popular yardsticks are the ways in which the Presidency has been depicted through film and TV. The Clinton era, for example, has come to be seen as a period of intensely human and libidinous cinematic Presidents such as those of Ivan Reitman’s Dave (1993) and Rob Reiner’s The American President (1995). In fact, were it not for films such as Independence Day (1996) and Air Force One (1997) asserting the President’s penchant for arse-kicking you could be forgiven for forgetting that while Clinton claimed to feel people’s pain, he was no slouch when it came to meting it out in the form of air strikes and deciding, for the first time, that the spread of WMDs was a military matter.

However, while the Bush era has been quick to provide us with Presidents who are either mentally unstable religious zealots (Battlestar Galactica) or bloodless pragmatists more eager to seek revenge than examine the facts (The Sum of all Fears [2002]), the enduring cinematic icon of the Bush era is undeniably the super hero. END_OF_DOCUMENT_TOKEN_TO_BE_REPLACED