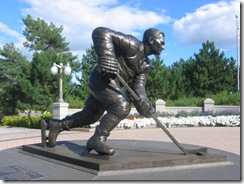 Paul’s recent post on Darwin as a religious icon made me think of this story (Via PhysOrg):

Since January 2009, Olivier Bauer has pioneered the world’s first course examining the link between hockey and religion. As a professor at the Université de Montréal’s Faculty of Theology, he also just compiled and coauthored a textbook examining the Canadiens as a religion, “La religion du Canadien de Montreal” (Fides, 2009)…

In English, the Montreal Canadiens are referred to as the Habs, but in French the legendary hockey team is often known as the Sainte-Flanelle (the Holy Flannel). The nickname of its new young goaltender Carey Price is Jesus Price and he is thought to be the savior of the team.

Canadiens fans also talk about the ghosts of the old Montreal Forum. French-Canadian broadcaster Ron Fournier is the prophet and his listeners are disciples. All these religious connotations intrigued Bauer.

“If the Habs are a religion should we fight it because it’s a form of adulation?” asks Bauer. “Or should we use it to highlight that certain values transmitted by the Habs can correspond to Christian values?”

Of course, this is a little different from setting up someone like Darwin as a quasi-religious figure: Bauer is connecting adulation of a hockey team directly with the fact that Quebec is historically predominantly Catholic–not hockey as a new religion, but hockey infiltrating an existing religion.

Apparently Bauer isn’t the only researcher who has looked at the links between the adulation of sports teams and religion: others have studied baseball in the U.S. and soccer in South America and Europe. But Bauer thinks the passion for the Montreal Canadiens is particularly intense, with people visiting the Saint Joseph’s Oratory to pray on game days.

Bauer’s course is being taught in three parts with the help of invited Swiss Professor Denis Müller, an ethicist and theologian specialized in soccer. The first part of the course addressed relics. For instance, some people believe to have been cured from disease after touching the jersey of Hall of Famer Maurice Richard.

Personally, I think you’d be more likely to get a disease by touching an old hockey jersey, but then, as a Canadian with almost no interest in hockey, I’m unquestionably an infidel.