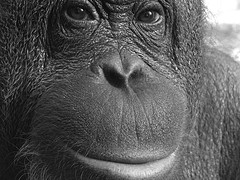 The Great Ape Project is a pressure group demanding a basic set of rights for hominids – and, as a side-effect, throwing up some questions about where the boundaries of rights for other living things should lie. [image by Frank Wouters]

Some countries already have legislation banning certain types of invasive experiments on apes, but GAP’s platform would also ban their exploitation for entertainment purposes as well as their use by profit-making ventures in general. After all, we wouldn’t allow a fellow human to be exploited (‘reality’ television shows notwithstanding – apparently people volunteer for those, and you can’t effectively legislate against stupidity).

Not everyone is keen on GAP’s rights-based approach, though, because it could lead to a moral ‘slippery slope’: once you’ve decided that apes need parity of rights, how can you then deny them to lesser mammals?