President Obama’s budget includes a mere $1.7 million, or 0.00041 percent of spending, for honeybee research. Jamison Foser notes that some politicians find that outrageous or hilarious, but that the debate — if you can call it that — over budget earmarks misses an an important point as far as bees are concerned:

Honeybees are pretty important. See, humans need food. Without it, we die. And bees not only produce honey, they pollinate all kinds of crops — onions, cashews, celery, strawberries, beets, broccoli, cabbage, cucumbers, apples … you get the picture. Honeybees play an important role in our food supply, and our economy. And honeybees have been disappearing at an alarming rate in recent years, for reasons that are not fully known.

It might be useful to know why. And, while admitting that earmarks might not be the best way to fund research, it might also be useful if politicians would stop criticizing things they don’t understand just because they sound funny. Volcano monitoring, planetarium projectors, fruit-fly research, and studies of the DNA of  threatened species called grizzly bears all come to mind.

But if polticians can’t be bothered to understand, and behave like short-sighted anti-space senators in early Arthur C. Clarke, is it too much to ask that our media could be bothered to investigate claims and counterclaims, instead of chortling like Beavis and Butthead? 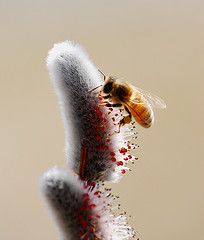