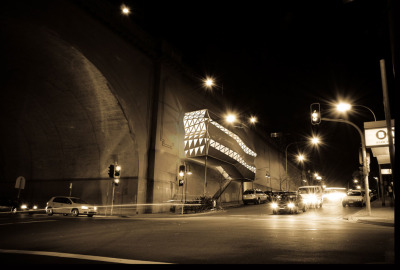 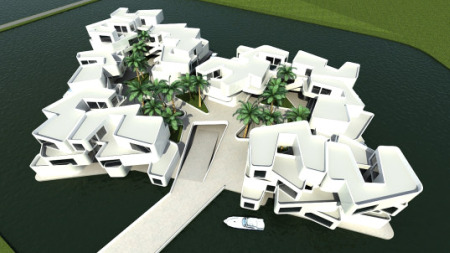 In what might be some bizarre manifestation of hyper-rapid Zeitgesit symbolism adoption, the repurposed shipping container really does look like it will be one of the visual memes of 2009. Here’s the latest contender, the proposed Lotto Turm of Stuttgart, Germany: 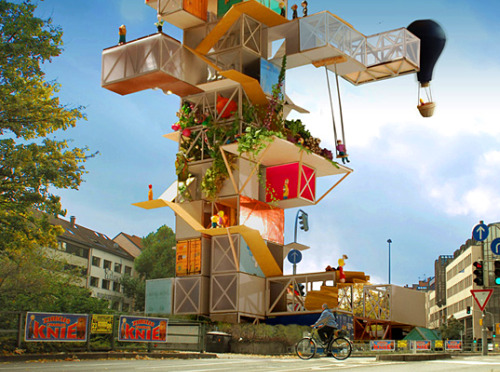 The Lotto Turm tower will be constructed of 55 shipping containers stacked on top of each other, and will be designed to include a noise-free courtyard as well as a spiral pathway that circles around the building. Balconies, terraces, and stairs accent the tower from top to bottom, giving the stacked block structure a fantastical quality, and Gardens and plants will accentuate the varied vertical landscape. The public may enter and go all the way to the top of tower for a view of the city through the lotto sphere.

I don’t know what local development policy is like in Germany, but there’s no way that a shipping container tower block would get a green light here in the UK (more’s the pity). That said, I’m not entirely sure how straight-faced the Lotto Turm idea really is – there’s definitely an element of humour in Behrendt’s design.

Still, given the amount of shipping containers that have started piling up empty in docks and factory lots around the country, they’re just waiting to be reused for something worthwhile; pragmatism may defeat NIMBYism in shorter order than anyone might expect. [image by architect/designer Lars Behrendt] 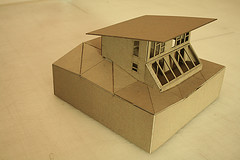 A fascinating article here at Physorg on American versions of German “passive houses” – houses that maintain a comfortable temperature in cold climates without the need for active heating systems:

Because there is no furnace, the rooms are quiet. The only sound in the kitchen is the hum of a refrigerator, which along with other appliances, helps supply heat to the airtight 2,300-square-foot Batavia, Ill., home.

Katrin Klingenberg, founder of the institute in Urbana, Ill., said that typically, passive-house owners use 10 percent of the energy used in a standard home.

More info on passive housing can be found here.

The humble shipping container has been reimagined quite a few times in recent years, and has appeared as a potential housing solution in sf novels and stories from (among others) Ken MacLeod, Neal Stephenson and Gareth L Powell, as well as starring as a plot McGuffin in William Gibson’s latest; the BBC are even following a shipping container by GPS for a year.

But nothing quite prepares you for the bright day-glo architectural enthusiam of the guys who’ve come up with CORB v2.0, a kind of mutating condominium made from shipping containers: 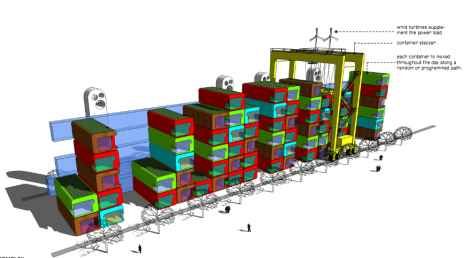 Changing your view or neighbours with the seasons or on a whim is not a problem at Corb. Changes in family dynamics or space requirements are easily dealt with.

Traditional hierarchies determined and reinforced by wealth are void here. When you live at Corb, everyone gets a penthouse just as often as they get a ground floor apartment.

One can only hope that, unlike Hiro Protagonist, you don’t end up with a choice of views over the runways of a major airport… or, as seems more likely, over a busy freight port. [image borrowed from Maynard Architects site; all rights reserved by owner, reproduced here under Fair Use terms; story via Justin Pickard]