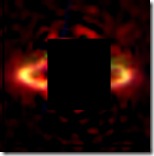 That’s the promising possibility (if you like the idea of extraterrestrial life) raised by the discovery by astronomers at the Carnegie Institution of highly complex organic molecules in the disk of red dust surrounding a young star (one very different from the sun) thought to be in the late stages of planet formation. Observations of light from the star via one of the instruments on the Hubble Space Telescope reveal that the light scattered by the dust disk is very red, matching the spectrum of large organic carbon molecules called tholins that no longer exist on Earth but are hypothesized to have been precursors to the biomolecules that make up living organisms. (Via SpaceDaily.)

The image above is a false-color image of the dust disk surrounding the star, HR 4796A, with the star itself masked to make the disk visible. The inner “hole” in the disk is big enough to swallow our solar system and may have been swept clean of dust by orbiting planets.

(And even though they’re both red, no, there’s no connection between the red dust of HR 4796A and the red rain of Kerala.)