I’m sure someone has a snappy neologism for things like this, but I’m damned if I can recall (or otherwsie invent) one. Nonetheless, and offered largely just for the WTF? factor, here’s oddball collapse-fetish travelogue-blog Spike Japan describing Huis ten Bosch, a vast Holland-themed amusement park on the shores of Omura Bay, Nagasaki Prefecture: 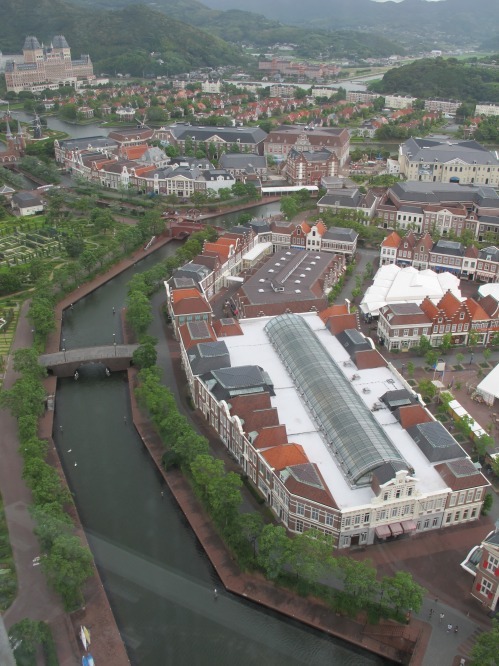 On a busman’s holiday in the Mediterranean in 1979, so the legend goes, Kamichika and his businessman travelling companion, the president of the real estate division of ball-bearing maker Minebea (slogan: Passion is POWER, Passion is SPEED, Passion is the FUTURE), are surveying a shimmering seascape when his companion turns to him and asks:

“Is there a sea like this in all Japan?”

So many consequences were to flow from such a simple question.

“Yes,” Kamichika is reported to have replied vehemently, “the marvelous sea of Omura Bay in Nagasaki, where I was born and raised. It’s every bit as good as the Mediterranean. Why can’t we get people to visit it, just like the Mediterranean?”

Emboldened by success—at its 1990 peak, Nagasaki Holland Village attracted 2mn visitors—in 1988 Kamichika began planning something a tad more ambitious: Huis ten Bosch. It was the Bubble; anything was possible. Six kilometers of canals, 3.2km of underground tunnels for the communications, energy, and water infrastructure, 400,000 trees, and 300,000 flowers and shrubs—sure, why not? Kamichika took his plans to the bankers and the bankers liked what they saw.

A strange story; almost a Doctorowian fable for the modern age.

Beware Spike Japan, by the way – if you have any interest in Japan (or simply other places in general), collapsonomics, good storytelling or all three, you could get lost for hours wandering the archives. Though there are far worse ways to spend an afternoon… [image is presumably copyright Spike Japan’s author, and hence is reproduced under Fair Use terms; contact for immediate takedown if required]