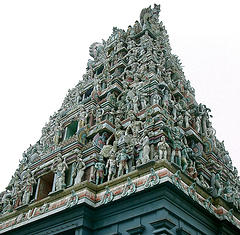 I guess most Futurismic readers are familiar with the disdain that being a science fiction fan brings from “normal” people, right? So, if we know how it hurts to be rejected on the basis of a completely harmless hobby or intellectual pursuit, why do we still do it to other people?

This is the question that Jeremiah Tolbert asks in his inaugural column for Fantasy Magazine. Take it away, Jeremy:

“In the Bad Old Days before the geek yearbook stereotype turned from “most likely to be 30 and still playing D&D in parent’s basement” into “most likely to be a billionaire before 30”, many fans were targeted with the word in a hurtful manner. If you’re on that chart [the well-known “Geek Hierarchy” flowchart], you’ve almost certainly been made fun of for it by someone. Such is life, and convincing the mainstream to accept us is a much larger battle than the one I wish to address here. But how about we take a break from bagging on one another?”

How about it, indeed. Much like Jeremy, I try hard to live by those ideals… though I’d be lying to claim that I’ve always done so, or that I don’t slip every now and again to this day. [image by jurvetson]

In an example of the sychronicity that the blogosphere is so good at creating, sf novelist Richard Morgan‘s guest spot standing in for Jeff VanderMeer at Omnivoracious takes a more specifically bookish approach to the same issue:

“… just try telling an audience of fantasy fans that Frodo should have died at Mount Doom. Steve Erikson tried it at a convention, and nearly caused a riot as a result. Oh yes, children, for if there is bigotry out there in the big bad world of mainstream literary crit, there’s as much and to spare in here, in the cosy and slightly claustrophobic confines of our genre. For every mainstream critic who wouldn’t know good science fiction or fantasy if it bit him in the ass, there is also a fistful of genre fans who think The God of Small Things must be some kind of fantasy epic about war between microscopic elves, Vineland is that Norse Saga about the Vikings discovering America, and Philip Roth is, wait a minute, oh yeah, that guy who used to sing with Van Halen, right?”

I guess everyone has a mote in their eye of some sort… we humans really have to struggle to get past our innate instinct to despise “the Other”, even in matters as inconsequential as the books we like reading. Small wonder we’re still fighting wars over patches of ground and coloured rags tied to sticks, then.

[ * Disclosure – Richard Morgan is one of my clients. ]