The more Bill Gibson claims modestly not to be a prophet, the more the world comes to resemble the ones in which his novels are set. Completely synthesized 3D holographic pop singer, anyone? [via MonkeyFilter]

Her hair is blue, she dresses like Sailor Moon, and she’ll only appear in concerts via a 3D ‘hologram’. Oh, and did I forget to mention that she’s completely fictional? Created by Crypton Future Media, Hatsune Miku is a virtual singing avatar that you can purchase for your PC and program to play any song you create.

Watching Miku sing live is pretty amazing. The 3D ‘hologram’ isn’t that impressive, it looks to be a modern version of the pepper’s ghost illusion we’ve seen before, but the crowd reaction is intense. I’ve been to concerts where the band’s fan base was considerably less enthusiastic. How must it feel to be a musician and see this virtual character getting way more love than you? Hatsune Miku and her ‘friends’ may only have played a few tours, but there’s little doubt that these guys are rock stars:

Well, you can colour me cynical, but given the levels of utterly obvious artifice on display in most of the popular meatpuppet pop acts, I’m not really surprised that the crowds go wild for idorus; there’s a strong element of suspension of disbelief involved with music fandom (one which extends just as deeply into forms and genres that are considered by their fans to be the polar opposite of pop), and unabashed artificiality is just another fact of modern life, especially to younger audiences.

Guardians of hollow notions of artistic authenticity (and curmudgeonly critics like myself) can at least take heart from the fact that idorus will face many of the same piracy problems and business model issues as flesh-and-blood acts, at least once the novelty quotient expires… though they’re probably less likely to get tired and jaded about their careers, to discover free jazz or to overdose on prescription painkillers.

That said, given how much of our engagement with musicians (and other artists) is connected to the narrative mythology that surrounds them – in many cases more than with their actual music, or so I’d argue – the arrival of the first by-design tortured/iconoclastic/bi-polar/just-plain-f*cked-up idoru can’t be too far away. 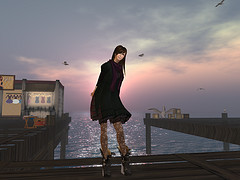 Just in case you didn’t catch it over at Chairman Bruce’s pad, here’s the promo video for Cyber Figure Alice, an augmented reality game/pet/miniature girlfriend from Geisha Tokyo Entertainment Inc.:

Try to ignore the fact that the main selling point of this virtual girl appears to be that you can dress her up in a variety of outfits, look up her skirt and make her life a misery, and think of the somewhat more positive potentials of the same technology…

That said, it’s probably fair (if a little depressing) to expect that the original guilt-free tormentable schoolgirl version will be the killer app for some time. Cyber Figure Alice apparently launches later this year, so expect the over-moneyed single geeks in your social circle to spend even more time at home than they do currently…