Via Jason Stoddard (and originally found at the Something Awful forums – have that, top-down media channels!), here are some Danish dudes doing something that, on paper, seems somewhere between naively hubristic and charmingly Quixotic: they’re trying to build a sub-orbital rocket vehicle for under €50,000. A vehicle that can carry a human passenger, that is. YA RLY.

This is a non-profit suborbital space endeavor, based entirely on sponsors and volunteers. Our mission is to launch a human being into space.

We are working fulltime to develop a series of suborbital space vehicles – designed to pave the way for manned space flight on a micro size spacecraft.

These guys aren’t just pipedreaming it up in the undergrad lounge, either; they just yesterday tested their HEAT-1x booster rocket. Got propulsion pr0n?

Maybe the top of the gravity well really is entrepreneurial turf from here onwards. 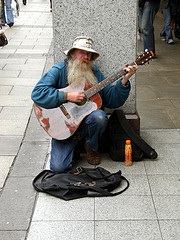 I imagine many of you have seen this elsewhere (judging by the dozens of different sources I saw it bounce through yesterday) but if not, here’s the one and only Amanda Palmer explaining why she’s not ashamed to ask her fans for money:

artists need to make money to eat and to continue to make art.

artists used to rely on middlemen to collect their money on their behalf, thereby rendering themselves innocent of cash-handling in the public eye.

artists will now be coming straight to you (yes YOU, you who want their music, their films, their books) for their paychecks.
please welcome them. please help them. please do not make them feel badly about asking you directly for money.
dead serious: this is the way shit is going to work from now on and it will work best if we all embrace it and don’t fight it.

unless you’ve been living under a rock, you’ve surely noticed that artists ALL over the place are reaching out directly to their fans for money.
how you do it is a different matter.
maybe i should be more tasteful.
maybe i should not stop my concerts and auction off art.
i do not claim to have figured out the perfect system, not by a long shot.

BUT … i’d rather get the system right gradually and learn from the mistakes and break new ground (with the help of an incredibly responsive and positive fanbase) for other artists who i assume are going to cautiously follow in our footsteps. we are creating the protocol, people, right here and now.

i don’t care if we fuck up. i care THAT we’re doing it.

It’s worthwhile reading for anyone who writes with the intent to sell their work, or those who publish at the small scale of webzines or print mags (or iPhone apps, or whatever other way you’ve decided to do it). As has been suggested before, dead-tree publishing is going to take a comparatively long time to catch up with the business models of the music industry, because the pressures of piracy and freely-available content aren’t so strong yet. But they will be… and it’ll happen sooner than you expect, especially if you just sit on your hands waiting for someone to give you the answer.

So be bold, try things. Throw the spaghetti at the wall and see if it sticks. Hal Duncan’s got the right idea – he’s doing a direct-to-audience publishing experiment on his blog right now. So go throw a few bucks in his hat, and know that you’ve bought good art… and helped feed the person who made it. [image by Martin Pettitt]

(Go throw Amanda Palmer a few coins, too; she’s not just a fine musician but a crusader for independent art, and that alone deserves your support.) 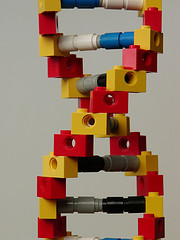 We’ve mentioned garage-sized biotech start-ups before, but not everyone’s in it for the money. As the price barrier to genetic engineering falls, some folk are hacking genes in an attempt to make the world a better place – like Meredith Patterson, for example:

The 31-year-old ex-computer programmer and now biohacker is working on modifying jellyfish genes and adding them to yoghurt to detect the toxic chemical melamine, which was found in baby milk in China last year after causing a number of deaths, and kidney damage to thousands of infants. Her idea is to engineer yoghurt so that in the presence of the toxin it turns fluorescent green, warning the producer that the food is contaminated. If her experiment is successful, she will release the design into the public domain.

Great stuff… but as the article at The Guardian points out, easy-entry biohacking presents as many risks as it offers fixes:

… Helen Wallace of GeneWatch in the UK thinks biohacking could be dangerous. “It is increasingly easy to order genes by mail,” she says. “Something like smallpox is hard to get, but there are other organisms that could become harmful. If you change a living organism’s properties, you could also change its interactions with the environment or the human body.” She adds: “Scientists are notorious for not seeing the unintended consequences.”

“Where is the oversight?” asks another interviewee, and it’s a good point. Will a self-policing global community of genetic scientists emerge, keeping an eye on one another and sharing data in the hopes of collaborating their way to success? The tools are there to enable it, at least.

Of course, it would be easy for individuals to slip through the cracks if they really wanted to… but the same is true of the old system as well. Maybe the best way to make sure we don’t get wiped out by a rogue scientist is to do the best we can to avoid making them feel disenfranchised and unappreciated. [image by mknowles]

It looks like people have busy over the summer; within the space of twenty-four hours, the Futurismic inbox has received news of two independent science fiction-related projects looking for an audience.

And because we like people who get out there and have a go under their own steam, we thought we’d give them a mention.

What is Deadbooks.com? Here’s the blurb from the site:

Spanning 150 chapters, involving 100 actors, and the cutting-edge sounds of musical artists worldwide, Deadbooks.com is a revolutionary mash-up of story-telling techniques.

The first ten hour season?! You can’t fault the ambition there, can you? In his email, Wuerslin says the project has taken him eight years to finish:

“There may be purists out there who think I’m trying to kill ‘The Novel’, but I disagree. Why shouldn’t the novel stretch out in new directions; transform into a new form of entertainment?”

When CD-ROMs were the IT buzzword of the day, they promised us that multimedia novels would be ubiquitous – has the idea finally found a home on the web in the form of Deadbooks.com? Go take a look and find out, then come back and let us know what you think.

Phasma Ex Machina is a forthcoming independent sf/horror movie which “follows the lives of two brothers and an electrical engineer trying to decipher a series of strange events. Everything changes when they discover that the distance between the living and the dead isn’t all that far.”

Phasma Ex Machina‘s producers are seeking feedback from the sf community about their concept. From the email:

“We are currently in the preproduction stages of the film and one of our foremost goals is to increase the authenticity of the supernatural and sci-fi genres. Your readers can give advice on what they would or wouldn’t like to see in a supernatural/sci-fi film.”

Hmm, crowdsourcing the test audiences, eh? From the reviews I’ve seen, I think George Lucas should have looked at doing something similar with his most recent output… If you’re intrigued and want to learn more, take a look around on the Phasma Ex Machina website. You can leave your feedback and opinions on their forum, too – but feel free to share ’em here as well, OK?