My from-a-distance fascination with EVE Online continues to grow*; its complex and anarchic political and economic scenes make for fascinating headlines, and it strikes me as the best extant model for the economically distinct synthetic worlds of the future. Ars Technica has a two-page piece on a recent EVE flap wherein the developers, CCP, started making an assortment of “vanity items” available for sale within the game. The economic set-up in EVE is complex, permitting money to flow in from meatspace as well as encouraging in-game trading, and players kicked off an extensive campaign of (in-world) disobedience and protest, thinking that CCP had handed a naked advantage to players who were financially better off in the reality outside the game.

Pretty much a carbon copy of meatspace protests over poorly-explained new laws or policies, which is interesting enough. But the second page has an innocuous-seeming paragraph that leapt out at me as being more astonishing than it appears:

EVE Online is one of the few games which has a formal player organization to speak for the customers of the game, called the Council of Stellar Management. The members of the CSM are democratically elected, and they present the concerns of players to CCP in order to keep everything running smoothly. As players continued to disrupt the game and CCP began to take a beating in the court of public opinion, the CSM was flown to the company’s offices in Iceland in order to discuss the issue of microtransactions.

Think about that for a second: not only does EVE have an elected player council, but said council was flown in to CCP’s HQ at CCP’s expense to sort things out. That’s a company that takes its userbase very seriously indeed.. As the Ars piece points out, this is at least partly due to necessity, but that necessity s a function of the freedom and engagement with the synthetic space that CCP has permitted since the start. I wonder if we’ll soon see more businesses that are not only this close to their clientele, but who genuinely understand that closeness as the foundation of their model… it’s a big step in the direction of cooperatives, which might make for a fine replacement for the increasingly-untrusted corporation in a world where nation-statehood is losing its grip.

[ * Yeah, I know, I should probably just sign up for an account and try it out, but I know how prone to addictive behaviours I am, and I have work that needs doing that won’t be much helped by my attempting to explore an anarchic virtual star-cluster. Unless someone wanted to pay me to write the story, that is. Hmmm. ]

Those Somalian pirates aren’t going away; in fact, they’ve extended their span of operations pretty considerably, and that – combined with some recent murderings of unransomed hostages – is understandably causing concern for shipping operators (though the cynic in me notes it took the murder of white Americans to get the appropriate level of ire stoked up).

But what to do? Mercenary escorts are useful, but expensive… so collective risk mitigation is one potential answer. have you paid your piracy insurance?

The Convoy Escort Program, a nonprofit company assembled by the Jardine Lloyd Thompson brokerage group in London, wants to sell a more efficient way to insure and protect merchant vessels, since the current method — of buying expensive ransom insurance and hoping that some navy ship will sail to the rescue if pirates attack — hasn’t lowered the risk of piracy.

Through the CEP, ship owners would be able to buy, say, a few days of war-zone insurance on the Lloyd’s of London market and also pay for a quasi-military escort past Somalia. The escort would give armed protection without the cost and hassle of armed teams on board every cargo ship. Shipowners have learned that expensive (and controversial) armed teams are one sure way to ward off a hijacking.

“The concept is that shipowners will not be paying any more than at the moment and maybe a lot less,” said Sean Woollerson from JLT. “But they will be afforded proper protection and the presence of the escorts will be a great morale booster for the seafarers.”

Great idea! Well, a great idea assuming you like the idea of what’s essentially a private navy, of course… and as the Miller-McCune article goes on to point out, this is how arms-race escalations of conflict can start:

Of course, a private navy could also change the atmosphere on the water off Somalia. Strict rules of engagement currently keep national navies from shooting or even arresting most pirates, and until recently, the pirates have been relatively gentle with their hostages. But the last couple of months have seen more aggression from the navies and a corresponding rise in nastiness from the pirates.

Presumably private boats would have more freedom to open fire, though no one wants to say so. The Royal Navy would have the Convoy Escort Patrol under “operational control,” but wouldn’t “manage” it, according to the London Times. “The crew would have to conform to international rules on combat and engagement,” the paper writes.

Oh, international laws on the conduct of warfare! They always get followed to the letter, don’t they? Especially when the press aren’t around.

My concern here is that – like so many of the solutions proposed to conflicts generated by massive wealth disparities – the CEP is a cure for the symptom, but not the disease. We all know how futile a game of whack-a-mole can be, but it seems we have deep-seated species-wide jones for it nonetheless.

[ Yes, yes, I know, the Crimson Permanent Assurance turned pirate rather than protecting against pirates, but I couldn’t pass up a chance at such an obscure Python reference. Sue me. ]

A provocative and interesting piece has been doing the rounds wherein a doctor suggests that those parents who decline to have their kids vaccinated against infectious illnesses should be obliged to pay higher insurance premiums as a result [via BoingBoing and many others].

Refusing to vaccinate a child is dangerous not just for that child but for entire communities. It’s precisely this point a colleague of mine was considering when he had the idea that parents who refuse to vaccinate their kids should pay substantially higher health insurance premiums.

It makes sense. Insurance, after all, is just a pool of money into which we all pay. In determining how much we or our employers pay, risk is taken into account.

The perfect analogy is smoking. If you smoke — and want to turn your lungs black and spend a greater portion of that pot of money on your possible chronic lung disease or any cancers you’ll get — then you may have to pay more.

Why shouldn’t we impose the same logic on parents who refuse to vaccinate their children?

It’s definitely logical, and there’s an appeal to market forces in there that I suspect has better odds of turning the tide of anti-vaccination paranoia than attempting to pateinetly explain the science to people who cannot (or simply will not) understand it.

The problem, of course, is what happens when the anti-vaccination faction refuses to pay insurance at all; I’m not sure how the law on these matters works in the US, but I’m pretty sure the consitutional obsession with freedom means that folk can’t be forced to contribute against their will. I’m also guessing that this a fracture that will occur along class and political lines… and those lines are looking pretty fractured already, at least from the outside looking in. So as logical as this idea looks on the surface, it’s probably indicative of greater social schism to come, rather than being a workable solution to a current problem.

But the overarching question here is “can we permit and manage science denialism in large societies using market forces?” Or, to put it another way, “believe what you want, but if you want to live here, there is a premium on dissent against scientific orthodoxy”. Phrased like that, you can see why some people describe science as a form of hegemonic belief system… though those that do tend to be devoted to hegemonic belief systems of their own – ones with much less basis in, y’know, reality, evidence, that kind of stuff. And I can’t see them cheerfully ponying up their antivax premiums any time soon, can you? Geographical separation looks increasingly like the only way this is going to shake down. 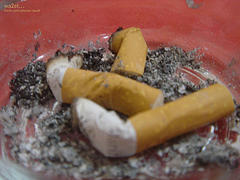 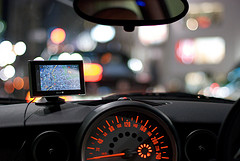 Sometimes it feels like there’s a camera watching us everywhere we go… and maybe the next step will be cameras watching us as we go between places, too. If you thought the idea of allowing the cable companies to watch you watching TV so they can serve you more relevant advertising was a bit weird, then try this for size: an insurance company offering to install a camera in your car so as to lower your premiums once you start letting your teenager borrow it. [via SlashDot, image by w00kie]

Of course, the TeenSafeDriver Program insists that no data would be gathered on other drivers of the same vehicle… just like the cable companies insist that their watching of the watchers would be benign and unobtrusive. Yet somehow I’m still reminded of the vampiric cliché: you’re only at risk if you invite them in to the house.

My immediate thought was “who’d be mad enough to sign up for that?” But then I thought back to Jan Chipchase’s post about augmented reality marketing:

… nobody’s going to stick an advertising driven augmented reality lens in their eye, right? How about for ‘free’ healthcare monitoring? Or because speed-dating is so much more fun when you have real time sexual preference look-ups on the people you’re looking at?

The TeenSafeDriver people have evidently sussed that you need to incentivize an intrusive technology if you want to roll it out successfully; I’ll be interested to see if similar schemes gain any traction in these times of lean finance.

Also worthy of note to any business nerds in the audience: this looks like an interesting iteration of the Andersonian “Free” business model, with the insurance company gambling the cost of the camera installations against the increased sign-up volume it hopes to obtain by offering the reduced premiums. I really have no idea whether it’ll catch on… but if it does, the car insurance landscape is going to change very fast.