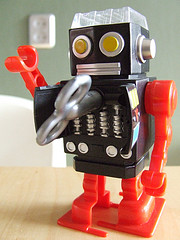 As evidenced by the number of posts we end up doing about them, robots are a real growth industry. Which is all well and good, but the folks in R&D departments everywhere have a problem.

In a nutshell, it’s interoperability: each robot is developed in isolation, meaning valuable resources are expended replicating functionalities that others have already nailed down. What they need is a common and standardised robot operating system.

This sorry state of affairs is set to change. Roboticists have begun to think about what robots have in common and what aspects of their construction can be standardised, hopefully resulting in a basic operating system everyone can use. This would let roboticists focus their attention on taking the technology forward.

On top of all this, each robot has its own unique hardware and software, so capabilities like balance implemented on one robot cannot easily be transferred to others.

Bourcier sees this changing if robotics advances in a manner similar to personal computing. For computers, the widespread adoption of Microsoft’s Disk Operating System (DOS), and later Windows, allowed programmers without detailed knowledge of the underlying hardware and file systems to build new applications and build on the work of others.

Bringing robotics to this point won’t be easy, though. “Robotics is at the stage where personal computing was about 30 years ago,” says Chad Jenkins of Brown University in Providence, Rhode Island. Like the home-brew computers of the late 70s and early 80s, robots used for research today often have a unique operating system (OS). “But at some point we have to come together to use the same resources,” says Jenkins.

And there’s already an open-source type system being developed… as well as a Microsoft alternative, for those who fancy paying a license fee for robots that are vulnerable to trojans and spyware, one assumes.

If we’re to extend the analogy of the current robotics industry being like the computer industry of the early eighties, I wonder if we can expect generic clone hardware to start appearing in response to a demand from maker-businesses and hobbyists? [via PlausibleFutures; image by woordenaar]