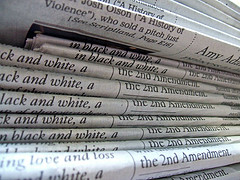 When newspapers are gone, what will you miss? asks Seth Godin. His answer? Not a great deal. He takes the opposite view to the journalists who tell us that the ‘proper’ investigative journalism will be killed off by the migration to the web:

… if we really care about the investigation and the analysis, we’ll pay for it one way or another. Maybe it’s a public good, a non profit function. Maybe a philanthropist puts up money for prizes. Maybe the Woodward and Bernstein of 2017 make so much money from breaking a story that it leads to a whole new generation of journalists.

The reality is that this sort of journalism is relatively cheap (compared to everything else the newspaper had to do in order to bring it to us.) Newspapers took two cents of journalism and wrapped in ninety-eight cents of overhead and distraction.

The obvious response here, especially from anyone in journalism, is going to be “well, what the hell does Godin know about running a newspaper?” I can’t answer that question, but I do know that Godin understands marketing, economics and human nature pretty well, and I have to say there’s something very logical about what he’s saying.

Or am I just being sold the story I want to hear? [image by drb62]