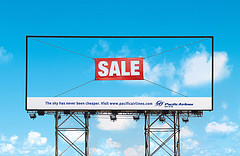 I linked to Jan Chipchase in passing when we were talking about in-game advertising the other day, but since then he’s posted more detailed thoughts on the corporate future of contextual advertising and augmented reality. If you don’t believe that the colonisation of augmented reality spaces by relentless barrages of commercial messages and content is inevitable, think again:

Spend enough time around corporate sales folk, whatever the industry, and sooner or later someone will talk about ‘owning’ the customer – where they are so into your brand that the next sales are inevitable. When it comes to visual media its all about owning eyeballs – diverting your gaze to their advertising and content […]

Ah – nobody’s going to stick an advertising driven augmented reality lens in their eye, right? How about for ‘free’ healthcare monitoring? Or because speed-dating is so much more fun when you have real time sexual preference look-ups on the people you’re looking at? Or simply because the alternative ways of viewing at the world put you milliseconds behind your social network in the connectivity stakes.

Yeah, this reasoning is all so base, ugly, techno-utopian. Sure, it *may* be about delivering the optimal augmented reality experience, but optimal for whom? There ain’t no such thing as (looking at a) free lunch.

Do no evil? To the shareholders!

To quote a band I’m rather fond of, this is the first draft of a worst case scenario – perhaps it won’t work out quite so badly. If we’re lucky. [image by Arturo de Albornoz]