I don’t know, personally, whether it’s merely difficult or actually impossible for writers to judge our own writing well. You write a story that you’re convinced is the finest thing you’ve ever written and send it out to the world, and it’s only 18 months and ten rejection slips later that you decide it really wasn’t so good after all. Or you scribble something up in a rush that you think is unremarkable, and everyone who reads it tells you it’s great.

This stuff is frustrating. If we don’t know how well we’re doing, how can we do better? And how can we ever have any confidence in our own work? If we can’t really judge the quality of our own writing, even something that sells can feel like a fluke, a bad call on the part of an editor. A few thousand adoring fans can be an effective cure for this, but they are hard to come by in those numbers. END_OF_DOCUMENT_TOKEN_TO_BE_REPLACED 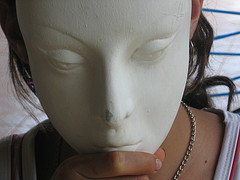