Karl Schroeder is guest emcee at Charlie Stross’s rostrum while the latter is a-travellin’, which is fine news in my world – Schroeder has been quiet of late (how dare a writer I like not provide me free brainfood on a regular basis!), but when he speaks he says powerful things. Powerful things like this:

Not only had the combination of Space Shuttle (most expensive yet most useless spacecraft ever constructed, a monstrous money-pit that cost $200 billion to develop, $1.5 billion for every launch, demanded a ground crew of over 3000 and had nowhere to go–and International Space Station (also fantastically expensive and in the wrong orbit to do any meaningful research) sucked all the oxygen out of space exploration for the average Joe; not only have most of my readers never witnessed a human being go beyond Earth orbit; but NASA’s Darwinian selection process for its astronaut corps has, for thirty years now, guaranteed that only men and women who agree to toe the party line will get into space. In order to become an astronaut, you have to accept, in a Winston Smith sort of way, that real space travel is barred to us. –That somehow, Apollo never happened or was some sort of fluke, and that the best that humanity can do now is clamber to the edge of that vastness we once soared through, and blink at it nervously. Because the Shuttle and ISS are both emperors without clothes, and if anybody involved in the projects actually admitted it, we all might collectively wake up, and demand something better.

All of which is why I’m heaving a vast sigh of relief that thirty years of mediocrity is finally ending this week. Farewell, Space Shuttle. I’m not going to miss you.

Me neither… though I prudently kept my opinion on the downlow yesterday, because there’s a whole lot of national identity stuff tied up with America and the Space Shuttle program, and applauding the Shuttle’s demise is like poking a bear with a sharp stick. But that bear really needs poking; so many of the laments I noticed yesterday seem to totally overlook the economic and philosophical shortcomings of the Shuttle program, interpreting it on a very basic symbolic level only.

Much in the way that some people interpret any criticism of the Israeli government as inherently anti-Semitic, criticising the Shuttle program is perceived as either anti-American or anti-space-exploration, or sometimes both at once. This irrationally defensive attitude highlights the lack of purpose that has echoed at the heart of the American space narrative for so long, like rapping your knuckles on a venerated statue and hearing the hollowness within as its worshippers gasp at your blasphemy.

When dogma is all you have left, it’s time to redefine your relationship to god.

[ For what it’s worth, I think you can have your pie and eat it; I grew up watching the Space Shuttle launches on TV, and they shaped my consciousness in a huge way; I can also appreciate the symbolic – and technological – sublimity of the Shuttle itself. But it was always more token than tool; if we’re serious about going beyond the gravity well – and I believe we should be – we need to ask ourselves why as well as how. The answer to the former will inform and qualify the answer to the latter. ]

After dismantling the suggestion that a Mars mission is too inherently dangerous for humans to undertake, Karl Schroeder has a new target – Science Daily announces a paper that claims that we can’t go to Mars because the spacecraft will fill up with nasty bacteria and make everyone sick [via SlashDot]:

The basic facts there are quite true, but they’re being deployed alongside some invidious assumptions, as Schroeder points out:

This doesn’t mean that space flight is intrinsically dangerous.  It means that badly shielded tin-can environments that aren’t spun for gravity are a bad idea.  And that is quite a different conclusion.

Secondly, shield the damn things.  The only reason why radiation is considered an issue is because it’s expensive to transport heavy shielding into orbit. One solution would be to use lunar water; simply put bags of the stuff around the ship.  That makes it heavier and hence requires more fuel… but now the problem can be seen for what it is, a simple problem of launch costs.

Spaceflight is not bad for our health.  Cut-rate spaceflight that avoids the obvious solutions is.

Those obvious solutions are, of course, a function of the launch cost issue – there’s a solution for pretty much everything if you can just get the necessary hardware up into orbit, but that’s not an option while we’re constrained by the limitations of rocketry.

I suspect that we’ll get there eventually, provided we survive our short- to medium-term future. After all, sailing ships were almost impossible to keep disease-free at first, until some smart minds got focussed on fixing the problems – and the motives for those fixes were profit and colonial expansion, which are likely to be exactly the same factors that propel us out of the gravity well. Perhaps the commercial space operators will break out of the rocketry box, given the chance.

Karl Schroeder, despite being a fairly recent discovery, is one of my favourite science fiction writers. This brief fifteen minute talk he gave to the O’Reilly Open Source Conference should do a pretty good job of explaining why.

See what I mean? Smart guy. 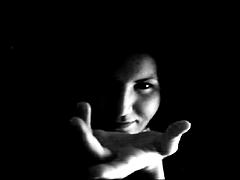 An interesting discussion from Thomas Frey at the DaVinci Institute on at which point our individual identity merges with that of our avatars:

With each generation of avatar, they will become more life-like, growing in realism, pressing the limits of autonomy as we become more and more reliant on them for experiencing the world. The avatar will become an extension of ourselves. The pain that we feel is the same pain that they feel, and vice versa. Like symbiotic twins separated only by a dimension or two, we are destined to become one with our avatars.

Karl Schroeder explores a similar notion of avatars becoming extensions of ourselves in Lady of Mazes.

Someone who may or may not be SF writer Karl Schoeder is Twittering on likely surprises for 2009: 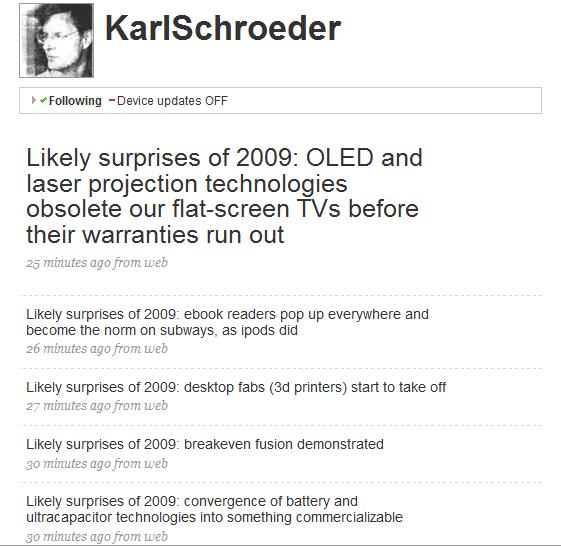 All fairly uncontentious, no?