It’s that time of year again – the judging panel of the Arthur C Clarke Award for Science Fiction Literature have released the final shortlist for the 2010 contest. Here’s the six finalists, plus some statistical bits and bobs:

Gwyneth Jones has been nominated five times, and won the Award once for her novel Bold As Love in 2002.

China Miéville has been nominated three times, and won the Award twice with Perdido Street Station in 2001 and Iron Council in 2005. If China Miéville wins in 2010 he will become the first author to win the prize three times in its twenty-four year history.

This is the first time Marcel Theroux and Chris Wooding have been nominated.

I’ve read one of the six (namely the Mieville, which I thought was excellent) – how about you lot? Care to cast the odds on the eventual winner?

I like the Clarke Award because it tends to highlight books I’m interested in far more reliably than the popularity contest awards (e.g. the Hugos), but to some people its selection process seems elitist – do you tend to agree more with juried awards or open-voted ones?

[* Regular readers will be aware that Adam Roberts thinks SF awards are rubbish, of course. So I kind of hope he wins, just in case the dichotomy makes him disappear in a puff of self-deprecatory puns. Not that I want the fellow to disappear; of course (unlike some aging but certainly-not-po-faced prog fans) – I just think it’d be a jolly fun way to end the ceremony. 😉 ]

Science fiction heavyweight Kim Stanley Robinson crops up in the current edition of New Scientist to sing the praises of British sf… and of sf in general. In addition to presenting flash-length pieces by a handful of big names – Ken MacLeod, Geoff Ryman, Justina Robson and more – he has a lengthy article decrying the blinkered tastes of the juries for awards like the Booker Prize:

… it seems to me that three or four of the last 10 Booker prizes should have gone to science fiction novels the juries hadn’t read. Should I name names? Why not: Air by Geoff Ryman should have won in 2005, Life by Gwyneth Jones in 2004, and Signs of Life by M. John Harrison in 1997. Indeed this year the prize should probably go to a science fiction comedy called Yellow Blue Tibia, by Adam Roberts.

This is hardly a new complaint – fandom has always muttered darkly into its real ale about the shunning of science fiction by the literary establishment, and this year saw some Guardian book bloggers attempt to redress the imbalance by running an open-nomination “Not The Booker” Prize (only to see all the genre titles swiftly voted out of the running, natch) – but to have it appear on the pages of New Scientist is an interesting development. Indeed, NS seems to be quite deliberately aligning itself with a science fictional/futurist mindset of late; perhaps the editorial team are equally convinced of sf’s didactic and educational powers as Robinson is?

Personally, I’ve always felt that prizes and public acceptance are overrated, and that science fiction does itself a disservice by chasing after them; Robinson appears to me to be taking a similar stance. I’ve never picked books because they won awards; personal recommendation has always carried far more weight, ever since I was quite young.

And if we truly believe that science fiction has the power and potential to open minds (and change them), isn’t the sincere recommendation of a book from friend to friend the best form of evangelism? To use an analogy with science itself: many of the greatest scientific innovators achieved their leaps of progress in spite of great public opposition and the opprobrium of the establishment; rather than kowtow and beg for crumbs of approval, they just knuckled down and got on with it, fueled by their own defiance, converting their few faithful supporters through their unflappable loyalty to their own ideas.

Don’t get me wrong, here: I’d love to see the authors I admire being paid more, or being interviewed as insightful pundits rather than geeky fringe artists who are good for ridiculous out-of-context quotations. I’d love to see science fiction as a powerful and accepted part of modern cultural discourse… but I don’t think it’ll ever achieve that through us pleading for legitimacy on its behalf.

As recent events have shown, hearts and minds aren’t won with shock and awe; they’re won with honesty and sincerity. If you care enough about science fiction that you want to see it read more widely and appreciated as something more than simple escapist entertainment, don’t waste your time storming the ramparts of the crumbling ivory tower of literature, or decrying the inevitably populist results of fan-voted awards. Instead, try to convert one other book-lover. If all of us managed to do that, we’d double the power of the genre almost overnight, and weaken the factional schisms within it at the same time. 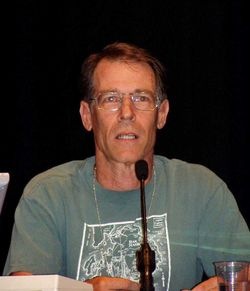 In case you missed Kim Stanley Robinson‘s appearance in Second Life, you can hear the man himself being interviewed by fellow writer James Patrick Kelly on a special episode of Mur Lafferty’s I Should Be Writing podcast.

Topics include the Science in the Capitol series, the Clarion Workshop (at which Robinson is teaching this year), and why he’s not been writing much short fiction recently. [Image from Wikipedia] 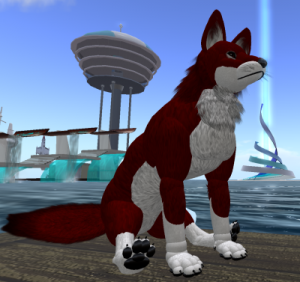 Second Life may be off the headline radar now the hype has died off, but there’s still plenty happening there if you know where to look. The latest genre author to appear in-world as a public speaker (following after such luminaries as William Gibson, Charles Stross and Terry Pratchett) is Kim Stanley Robinson, who will be donning the form of a coyote while he gives a presentation to Second Life’s transhumanist clade, Extropia. [via NewWorldNotes]

Robinson’s appearance is scheduled for this coming Saturday, 17th January, at high noon Second Life Time/PDT; full details at the Extropia Events blog (to which is also due the credit for the screenshot of Robinson’s coyote avatar, Stan Shackleton).