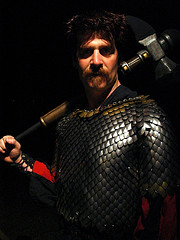 Fantasy roleplaying games are either played out around a snack-strewn table or sat at a high-powered gaming rig, right? Well, not necessarily. LARPing is a fairly old phenomenon, but True Dungeon is an interesting twist on the idea that I’d not heard of before:

“Each year at Gen Con Indy, a massive gaming convention held in Indianapolis, Martin and a cadre of volunteers assemble a life-size dungeon, complete with traps, monsters and treasure. More than 3,000 people — some dressed for the part — take on the role of a fantasy adventurer and travel through the dungeon each year, attempting to avoid traps, defeat monsters and claim treasure.

From the 6,000 hand-carved stones that make up the walls to True Dungeon‘s immersive sound effects, Martin strives to provide the ambiance of a classic fantasy dungeon. Some monsters are portrayed by volunteers in makeup, while others are sculpted creations or animatronic puppets. Martin adds more detail and complexity each year, within the limits of the space available.”

So yeah, my inner geek thinks that would probably be a guilty pleasure it’d quite enjoy as well. But I wonder if there’d be enough interest in it that a permanent installation somewhere would be a viable business proposition? Both fantasy worlds and RPGs are big business these days by comparison to their outsider status of a few decades ago, after all. [image by Danielle Blue]

Imagine what you could do with a couple of empty warehouses… and you wouldn’t have to stick to fantasy settings, you could just as easily whomp up something more science fictional. Hell, why stop at a couple of warehouses – once they’ve been emptied by the urban drift, you could make an entire town into an RPG setting! Oh, wait, hang on…