The conclusions may not be surprising, but the method of discovery is intriguing. Oregon State researchers sampled municipal wastewater before it was treated to create a map of drug excretion.

The study looked at 96 communities, representing about 65% of Oregon’s population. It measured levels of methamphetamine, MDMA (ecstasy), and BZE, a cocaine metabolite.

They found that the index loads of BZE were significantly higher in urban areas and below the level of detection in some rural areas. Methamphetamine was present in all municipalities, rural and urban. MDMA was at quantifiable levels in less than half of the communities, with a significant trend toward higher index loads in more urban areas.

The researchers expect their method can help map patterns of illegal drug use. Next step is to find the best method to get a reliable annual reading.

We’ve already seen how the public has been drafted in to help bust people trafficking across the US/Mexico border; turns out that law enforcement agencies in Arkansas and Texas are using web mashups to enable members of the public to track down the perps of other forms of crime:

Law enforcement agencies have longed relied on the press and the public to help catch crooks, of course. And some departments, like the NYPD, upload their “wanted” posters. But BanditTrackerArkansas.com — and its sister site for Texas, BanditTracker.com — are a little different and a little more sophisticated. Descriptions of the suspect and the crime are paired with pictures from the bank’s surveillance cameras, both indoor and out. The whole thing is then plotted on a Google Map.

The scheme seems to be in its infancy at the moment, but I doubt it’ll stay that way for long; budget restraints will mean a continued shortage of law enforcement officers, but there’ll probably be no shortage of people willing to do their bit to nab the baddies.

Somehow, I find this a lot less sinister than the border-watch systems; it smacks of a more honest sense of community. That said, it also has greater potential for some quick and dirty hacking, whether it be to protect a criminal from pursuit or to frame someone innocent… 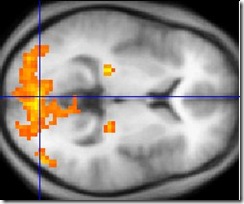 This is one of the most science fictional sounding news stories to surface in the past few days. From the New York Times:

India has become the first country to convict someone of a crime relying on evidence from this controversial machine: a brain scanner that produces images of the human mind in action and is said to reveal signs that a suspect remembers details of the crime in question.

For years, scientists have peered into the brain and sought to identify deception. They have shot infrared beams through liars’ heads, placed them in giant magnetic resonance imaging machines and used scanners to track their eyeballs. Since the Sept. 11 attacks, the United States has plowed money into brain-based lie detection in the hope of producing more fruitful counterterrorism investigations.

The technologies, generally regarded as promising but unproved, have yet to be widely accepted as evidence — except in India, where in recent years judges have begun to admit brain scans. But it was only in June, in a murder case in Pune, in Maharashtra State, that a judge explicitly cited a scan as proof that the suspect’s brain held “experiential knowledge” about the crime that only the killer could possess, sentencing her to life in prison.

Psychologists and neuroscientists in the United States, which has been at the forefront of brain-based lie detection, variously called India’s application of the technology to legal cases “fascinating,” “ridiculous,” “chilling” and “unconscionable.” (While attempts have been made in the United States to introduce findings of similar tests into court cases, these generally have been by defense lawyers trying to show the mental impairment of the accused, not by prosecutors trying to convict.)

If the technology actually works, it holds obvious promise in law enforcement and security efforts. Polygraph tests are notoriously unreliable, measuring anxiety rather than truth-telling, and so called “truth serum” just makes people babble. But:

After passing an 18-page promotional dossier about the BEOS test to a few of his colleagues, Michael S. Gazzaniga, a neuroscientist and director of the SAGE Center for the Study of the Mind at the University of California, Santa Barbara, said: “Well, the experts all agree. This work is shaky at best.”

Even if brain-scan lie-detection technology doesn’t work as advertised yet, though, that doesn’t mean it won’t work in the future, raising any number of issues that will vary from country to country depending on each nation’s particular legal system.

And if it becomes well established? Then those tempted to break the law could literally be warned, “Don’t even think about it.”