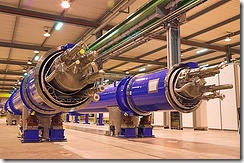 In a world replete with frivolous and silly lawsuits, the two guys pressing a lawsuit (in Hawaii) to stop the CERN Large Hadron Collider being turned on are surely leading the pack. They’re allegedly worried that the LHC will create a miniature black hole that will OMG SWALLOW TEH URTH!!1! [image by Spadger]

It appears that their fears are at least partly founded in reality, though. Phil “Bad Astronomy” Plait explains the potential risks of colliding subatomic particles … but he goes on to point out that the scientists in charge of the LHC project have already looked into the possibilities and concluded that the risk is so small as to be negligible.

Of course, they might be wrong. But given the choice of going with either the scientific method or the opinion of two guys who made a beeline for a Hawaiian courtroom, my money’s on the fellows wearing the lab-coats.

*See, Tomas – it’s not just you who can sneak obtuse references to British rock bands into Futurismic posts! 😉