There’s a lot of things on which Thomas Barnett and I would disagree, but there’s no getting around the way he can see further ahead than most foreign policy wonks. Forget oil, and start worrying about food supply:

Which gets me to our Spanish friend over here: an actual E. coli outbreak in Europe, centered largely in Germany, kills upwards of two dozen while sickening hundreds more. The early fingers point at Spanish cucumbers, but that’s looking iffy on investigation. Truth is, we may never know, but once the accusation is levied, Spain’s vegetable and fruit export industry may never be the same, and to me, that’s an interesting pathway for what I expect Fifth-Generation Warfare (which focuses – by some experts’ definition – on the disruption of the enemy’s ability to “observe” in John Boyd’s OODA loop)  will be all about in the 21st century: biological terror to create economic dislocation and loss (along with the usual panics).

Not so sure about his “century of [x]” reasoning, and I’d argue that we’ve seen the “wars over energy” being played out in the Middle east over the last few decades (with, sadly, more to come, though I think we could be in the final act of that particular movie), but by highlighting food supply as an infrastructure that could (and will) be leaned on to highly disruptive effect, I think he’s pretty much spot on. Likewise with the idea of ideological factions piggy-backing on events that may simply be natural or emergent; why invest effort on complicated terror schemes when you can just claim random events for free?

However, I’m surprised that he misses (or maybe simply fails to mention) food’s close sibling, water, which is already becoming a critical resource in developing nations, and is the infrastructural elephant-in-the-room in The Artist Formerly Known As The First World. Seriously, talk to people who work in utility infrastructure; we’re going through way more water than is sustainable, and climate change is likely to exacerbate the problem by changing availability patterns at local levels (hi, Australia!). We’ve already got Alaskan towns looking to export their allotted water rights to the more thirsty corners of the world… and while there’s a possibility we could wean ourselves off our addiction to long-chain hydrocarbons (technically simple, but politically fraught), water is a fundamental need, and an issue that demands we either start thinking in global terms or face some sort of Mad-Max-esque descent into feudal squabblings over the echoing mouths of artesian wells.. 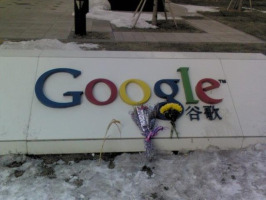 Well, this story’s everywhere this morning. After allegedly uncovering a “sophisticated and targeted” hacking attack, Google are now “reviewing the feasibility of their business operations in China”, which includes the controversial censorship systems they applied to Google.cn; here’s the official announcement, which is a beautiful example of legalese that says one thing, implies many others and leaves a lot of spaces uncharted. Chinese citizens are laying flowers outside Google’s Beijing office [via Jan Chipchase].

Beyond the glossy surface of the public announcements, however, we can’t be entirely sure what’s going on. The Wikileaks crew have tweeted a few revealing points:

Gossip from within google.cn is Shanghai office used as CN gov attack stage in US source code network. #

China has been quietly asking for the same access to google logfiles as US intelligence for 2-3 years now. #

Should be noted that Google keeps secret how many user’s records are disclosed to US intelligence, others. #

correction: the time of the Chinese requests/demands are not exactly known and are possibly in the last 12 months. #

Regardless of the exact causes and motivations behind Google’s threats to withdraw, it highlights the incredible bargaining power that a company of that size and influence has on the same stage as nation-states. It’s not entirely unimaginable to think that Google suspected something like this might have happened all along, and they were just waiting for the right moment to bring their leverage to bear – after all, China’s a big old market, and they’d probably far rather its citizens had full unfettered access to the web, if only so as to advertise to them more effectively. So why not agree to initial compromises, let the people get a taste for what they have to offer, and then threaten to take the toys home when the government makes an institutionally inevitable blunder?

It remains to be seen how seriously the Chinese government will take this threat – it’s not been a good few months for them as far as international publicity is concerned, and Google is a big economic player whose favour I suspect they’d rather not lose. But China’s people will be seriously miffed about it, and I that’s what makes me think that Google are far more cunning than they’re letting on. I’m not under the illusion that they’re interested in anything more than running a profitable business (though that whole “don’t be evil” thing is a pretty effective rule-of-thumb for achieving such), and bringing down totalitarian governments isn’t in their regular remit. But look at it this way: if you were running a business of that size and looking at a potential market that lucrative, and you saw a way to potentially open up the laws that currently restrict your business in that market by playing off the market’s citizens (and international public opinion) against the government, and you reckoned you could pull it off…

OK, so I’m hypothesising wildly here, but my point is that it’s by no means completely implausible. I’m reminded of Jason Stoddard’s points about the mythical bugbear of evil corporate hegemony:

Google stand to make a lot of money if they can loosen the government leash in China, right? Right… so keep your eyes on the dollar signs. This story isn’t over yet, I suspect.