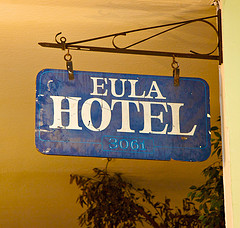 Malicious software and obfuscatory legalese – two bad tastes that, I imagine, taste even worse together. [image by j l t]

Thankfully, as I’m not in the business of trying to turn a profit by building botnets, it’s not a flavour combo I’ve encountered myself, but there are reports that such things really do exist. Caught with the same economic problem as legitimate software houses – an infinite good, easily reproduced – malware crews are including EULAs with their program packages.

Of course, a malware author can’t fall back on the courts to enforce the terms of the agreement, and so the threatened actions are a little more, er, direct – basically, if you mess with the code they’ll rat you out to the antivirus companies. But, in the words of Mike Masnick at TechDirt:

“… we already know that almost no one reads normal software EULAs, so I somehow doubt that the online scammers using this software are bothering with the fine print either.”

I can’t say I’m feeling too sad about that.