Via Michael Anissimov, here’s a spectacularly empty diatribe against “deathhackers” by TechCrunch‘s Paul Carr. Carr objects to the idea of radical life extension as advocated by transhumanists, which is fair enough, but as written here most of his objections seem to boil down to personal distate toward those advocates. Ad hominem ahoy!

Apart from rabid over-achieving, there’s another thing that unites all life-extension obsessives: they look like death. “Medievally thin and pale,” is how the Times (quoting Weiner’s book) describes [Aubrey] de Grey.

This just in: unattractive and/or geeky people interested in living longer. Film at eleven!

Amongst the ire and jealousy of “rabid over-achievers” (and a little bit of self-promotion, natch), Carr does have a point to make, namely that death is our greatest motivator:

What if the real reason these entrepreneurs have achieved so much is precisely because – more so than other mortals – they were born with a keen understanding they are working to a fixed (if unknown) deadline? It’s that fear of death that makes them succeed, not the other way around.

Regular readers will remember that this is an idea I have a great deal of personal sympathy with, though I’ve never suggested anyone else should be prevented from chasing immortality just because I’m not sure I’d want it for myself.

Anissimov also links to a rebuttal of Carr by Greg Fish, usually more of a gadfly against transhumanist tropes than a defender thereof:

Instead of telling entrepreneurs and angel investors who have a very real passion for science and technology to embrace their mortality, Carr should be encouraging them to pursue their lofty goals. Yes, ask them pointed questions, ask them to show you their thought process, and try to steer them from fantastic, pseudoscientific, or wishful thinking, but encourage their ideas because these people can take us to new places with the right support, motivation and a guiding hand from biologists, chemists, physicists, and hands-on researchers. No one has ever made a breakthrough by refusing to aim above mediocrity, and that’s why we shouldn’t be trying to promote the gospel of “eh, it’s good enough,” among those who love to think outside the box.

Let the dreamers dream, in other words; I’m down with that, pretty much.

But there’s a bit of serendipity here, as life extension is very much on my mind at the moment. I’ve been reading Getting To Know You, David Marusek’s first short story collection; if you’ve read Marusek in the short or long form, you’ll be aware of his imagined future where radical life extension is ubiquitous among the privileged, and where a servitor underclass of clones and artificial intelligences works for them to prop up the “boutique economies” that make such a world possible. The story “Cabbages and Kale, or: How We Downsized North America” neatly captures my own personal concern about life extension technology, namely that – like almost all technologies, at least at first – it will be the exclusive province of those who are already rich, politically powerful and long-lived.

By the by, this also dovetails with the Matt Ridley essay I linked to earlier today, in that Marusek’s answer to the economic problems of a functionally immortal power class is to have them restrict reproduction in order to keep the population at a level where the system still works: a voluntary stagnation, a rigged equilibrium. But the point I’m making here is this: technologies are never inherently bad, but the way the world works tends to gift their benefits to those who have the least need of them. We shouldn’t fear life extension, but fearing life extension held exclusively in the hands of the political classes is a very wise move indeed.

[ I very heartily recommend Marusek’s short stories and novels to Futurismic readers; not only is he a writer of great craft and skill, but he deals with the complex sociopolitical outcomes of technological ideas like life extension and nanotechnology which are, at present, little more than attractive possibilities lurking beyond the horizon. ] 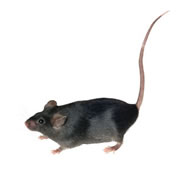 The protein type 5 adenylyl cyclase (AC5) seems to act as an amplifier of adrenaline response in the heart. Mutant mice that don’t make AC5 live up to 30 percent longer, weigh less as they age than normal mice, and may be more resistant to heart disease and cancer. Researchers are already developing drugs that inhibit AC5, but cardiologist H. Kirk Hammond cautions against hoping for a miracle cure for aging.

“I think first what I would do is get people to slow down on the highway, stop eating Big Macs and stop smoking.”