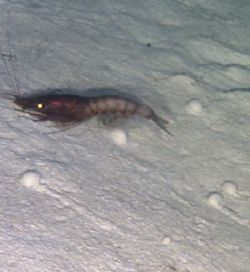 A new discovery from the world beneath the ocean waves: a single-celled organism the size of a grape that rolls along the sea-bed like some sort of aquatic tumbleweed. [image credit Sönke Johnsen; borrowed from linked article]

The researchers said that it’s possible that the sea grape may be a descendent of the creature that made the tracks that are well known from the fossil record. Or – like the tuatara or the coelacanth – the protist could be a living fossil, that has changed little for as many as 1.8 billion years.

I.8 million years is a long time – time enough, apparently, to allow even rocks and minerals to evolve. [via SlashDot]