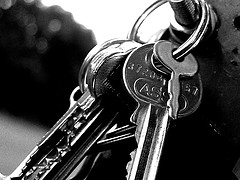 Here’s a neat but nasty little criminal hack that some smart folks at UC San Diego just released as a proof-of-concept: it’s possible for someone to clone your house keys from a photograph taken up to 200 feet away.

The keys used in the most common residential locks in the United States have a series of 5 or 6 cuts, spaced out at regular intervals. The computer scientists created a program in MatLab that can process photos of keys from nearly any angle and measure the depth of each cut. String together the depth of each cut and you have a key’s bitting code, which together with basic information on the brand and type of key you have, is what you need to make a duplicate key.

Crafty stuff, so much so that they suggest that blurring your key teeth on public photographs is probably as wise as blurring your credit card numbers – though it’s hard to imagine a criminal bothering to do this if they could just get their hands on the right sort of bump key.

But it’s a great example of the sort of minor science fiction plot point that would have sounded ridiculously futuristic just ten years ago… I guess maybe tagging yourself with an RFID chip to open your door has merits after all. [picture by Bohman]