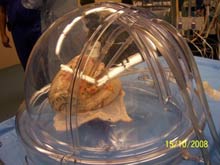 A new technique for storing lungs outside the human body has been developed by the Toronto General Hospital:

In an operating room at the hospital, the technology can keep a pair of human lungs slowly breathing inside a glass dome attached to a ventilator, pump, and filters.

The lungs are maintained at normal body temperature of 37 °C and perfused with a bloodless solution that contains nutrients, proteins, and oxygen.

The organs are kept alive in the machine, developed with Vitrolife, for up to 12 hours while surgeons assess function and repair them.

It is hoped that this process will mean lungs intended for transplant are more likely to be usable. According to the Technology Review article as few as one in ten lungs for transplant are usable with existing cooling-based preservation techniques.