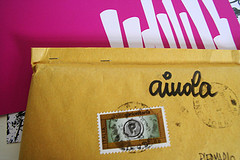 Sometimes I think I should have more faith in my own mad ideas. While the UK postal strikes were in full effect earlier in the year, I was kicking around an plan for replacing the increasingly beleaguered Royal Mail with a sort of peer-to-peer localised mail delivery system, which everyone I mentioned it to told me was completely impractical. [image by piermario]

I dare say they were probably right, but it’s still somehow gratifying to see that it’s not so crazy an idea that I’m the only person to have had it – via Global Guerrillas comes a post by a fellow called Chase Saunders in which he describes a similar idea: UsExpress.

I have mental picture of millions of people driving back and forth to work (and other places) over and over again.  It’s almost like Brownian motion.  Even if people rarely took long trips, there would be plenty of this routine, back and forth motion to ship all the packages we could possibly want, if only there were a service that gave a percentage of these drivers the right incentives, information, and infrastructure to hand off the packages at the proper moment. USExpress could be that service.

If my father took 10 packages, 4 days a week, fifty weeks a year, that would be 120 x 10 x 200 = 240,000 package miles.  How much do you think it costs to pay for a UPS driver to carry and deliver 240,000 package-miles?  Even if we assume an average of 300 packages on board at all times, that’s probably at least a week’s salary, not to mention overhead and benefits.  The difference is, the UPS guy is not going to drive that route unless we pay him (and train him, and buy him a truck, etc.)  But my father is going to drive to work anyway. If the pickup and dropoff locations are close enough to his work and home, why not generate a few hundred — or a few thousand — extra dollars a year?

Sure, there are some flaws to the idea, but Saunders addresses some of the big ones. The major stumbling block would be getting past the largely unfounded institutional trust we have in national mail systems – the trust that parcels won’t be lost, and that they will get to where they’re supposed to go, on neither of which Royal Mail has a flawless record. But such a system might just fill the gap as energy costs soar toward the day that physical delivery becomes obsolete…