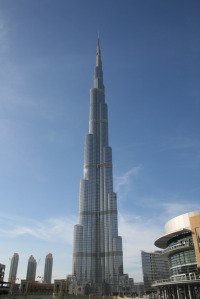 File under science fictional employment opportunities: the Burj Dubai (that ludicrously huge tower in Dubai which we’ve mentioned here before) is finally open for business (if there’s any business left, natch), which means they need to keep the thing clean for tourists and visiting dignitaries – quite a challenge when you’re talking about a building that clocks in at over 800m in height. [image courtesy Wikipedia]

There are 23,000 glass panels on that thing, most of which will be cleaned by BMUs (robot Building Maintenance Units), but some of the uppermost sections just can’t be reached without using old-fashioned meatworkers with ropes and harnesses… and to protect them from the harsh sun up there, the workers wear a get-up much like a spacesuit, complete with a backpack full of electrolytic “sports beverage” to keep them hydrated.

Certainly not a job for anyone with phobias of heights. Or claustrophobia, for that matter… [via @Ballardian]

Things are going to get a little busier up in geostationary orbit… not only are there destined to be an increasing number of broken satellites cluttering up this important orbital region, but soon there’ll be little robot repair bots flying around up there trying to fix them (or push them out of the way):

Their robots will dock with failing satellites to carry out repairs or push them into “graveyard orbits”, freeing vital space in geostationary orbit. This is the narrow band 22,000 miles above the Earth in which orbiting objects appear fixed at the same point. More than 200 dead satellites litter this orbit. Within 10 years that number could increase fivefold, the International Association for the Advancement of Space Safety has warned.

Klaus Landzettel, head of space robotics at DLR, said engineering advances, including the development of machines that can withstand temperatures ranging from -170C (-274F) to 200C (392F), meant that the German robots will be “ready to be used on any satellite, whether it’s designed to be docked or not”.

Hellooooo, orbital commercial warfare! Rival communications company squeezing you out in a particular region? Not any longer – not once their sat takes an unscheduled trip to the Lagrange point!