The campaign was created by Placecast, a location-based mobile ad company in San Francisco. It uses a practice called geo-fencing, which draws a virtual perimeter around a particular location. When someone steps into the geo-fenced area, a text message is sent, but only if consumers have opted in to receive messages.

Placecast created 1,000 geo-fences in and around New York, San Francisco, Seattle and Boston, cities where the North Face has many stores and areas that get a lot of snow or rain, so the company can tailor its messages to the weather. In urban areas, the fences are up to half a mile around stores, and in suburban areas they are up to a mile around stores.

It is going to be huge, especially with young people who text preferentially over talking on their phones. And of course, the retailers will pay for the messages.

And even better than come-ons like these will be the coupons. I am driving past the local Giant supermaket, and I get a text message with an attachment: 2 coupons for brands that I have registered at the Giant website. […]

But what Miller completely forgets to mention is that this is direct advertising, like direct mail was. This will end run the media companies who have made their bread and butter from advertising and coupons. If Domino’s can text me a code to get two pizzas half off today, why would the[y] advertise in the local paper?

If the future of advertising is direct and opt-in, through mobile devices to the consumer, the media lose the support of retail and local advertisers.

Yes, consumers still need to learn about PF Chiangs in the first place, but that is much more likely to be a direct experience, too, like going there with friends and then signing up for text-based promotions because it’s mentioned on the menu, or a friend uses a coupon or discount code.

The future of advertising is moving outside of media, and that’s another nail in the coffin for traditional print media.

And of course, there’ll be ways to game the locational ads system, too; step beyond the text message coupons and into mobile map apps, and suddenly there’s an incentive not to send you by the shortest route, but by the most lucrative – a brainwave courtesy of Jan Chipchase, caught in traffic in Virginia:

… the result I suspect of a sat-nav that decided that every possible road-works was a Point of Interest. Which might sound a bit far fetched today, until you consider that someone somewhere is drawing on ever more reams of data to serve up your your route – and someone else somewhere else is using every tool in their disposable to cajole individuals of interest past places ‘of interest’.

When the company pitching you advertising *also* calculates the most ‘efficient’ route to take from A to B you need to ask the criteria by wh[ich] efficiency is measured. And keep asking – the answer will likely change with the ebb and flow of financial results.

Of course, you could always turn off your phone, foregoing the navigational assistance in exchange for freedom from interstitial marketing. But then there’s a 93% chance that your route will be guessed by analysis of your previous movements, so you might as well leave it on and hope for a good open-source ad-blocker app…

… though this is almost certainly more worth worrying about than geolocational robbery crews. 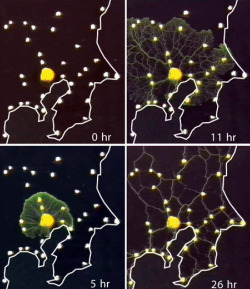 Good news for wannabe cyborgs and transhumans! New Scientist reports on another manifestation of plasticity in the human mind; it turns out that tool use results in a remapping of the mind’s perception of the body, which in turn suggests that adapting to artificial prosthetics or cyborg bolt-ons is within the capability of our baseline brains.

The brain maintains a physical map of the body, with different areas in charge of different body parts. Researchers have suggested that when we use tools, our brains incorporate them into this map.

To test the idea, Alessandro Farné of the University of Claude Bernard in Lyon, France, and colleagues attached a mechanical grabber to the arms of 14 volunteers. The modified subjects then used the grabber to pick up out-of-reach objects.

Shortly afterwards, the volunteers perceived touches on their elbow and fingertip as further apart than they really were, and took longer to point to or grasp objects with their hand than prior to using the tool.

The explanation, say the team, is that their brains had adjusted the brain areas that normally control the arm to account for the tool and not yet adjusted back to normal.

“This is the first evidence that tool use alters the body [map],” says Farné.

Farné says the same kind of brain “plasticity” might be involved in regaining control of a transplanted hand or a prosthetic limb when the original has been lost. The brain might also readily incorporate cyborg additions – a cyborg arm or other body part – into its body schema, says Farné, “and possibly new body parts differing in shape and/or number, for example four arms.”

So, good news should you decide that you want to become a permanent cyber-centaur by wearing these things:

Alternate-history fans will appreciate these US Department of Defense maps of a projected Soviet invasion of Western Europe, heralding as they would have done the beginning of WWIII:

This map is a really a picture in macro-scale of the epic tank battle for the plains of Germany, that entire generations of Western and Soviet officers built careers around planning and preparing for. In the history of human civilization, the Soviet Western TVD invasion was probably the most researched, contemplated, and gamed out battle that was never actually to take place. Fifty years of voluminous strategic studies were compiled by both sides on this very subject, as both sides searched for advantages in a truly enormous field chess game.

I don’t know enough about the history to say if this is paranoiac or just horrific.