Interesting think-piece from Wagner James Au of New World Notes; he’s wondering if the drop-off of interest in virtual worlds is driven by the very human need to be able to see the real face of the person you’re interacting with. The riff originates from noting that folk in Halloween costumes that hid their faces experienced less engagement and roleplay with others than those in costumes where the face was uncovered:

Without the ability to peek at the person behind the costume, people were largely leery, and standoffish. Many of these face-obscuring costumes were incredibly creative and believable, which you might think would encourage more roleplay. But for the most part, if they couldn’t get a rough idea of the person inside the outfit, people would hold back.

I think we’re seeing a similar effect with virtual worlds, as compared to social games. Most of the biggest social games, like FarmVille, have customized avatars, but the avatar is connected to a real identity, and perhaps even more important, a real face. In effect, social game avatars act like Halloween costumes, where you can see the person inside the outfit. Most avatars in virtual worlds, by contrast, resemble a full body costume where the face is largely or totally obscured. This is probably a major reason why they’ve failed to gain mass adoption. In effect, most of the population is looking at virtual world avatars the same way people at Halloween parties look at costumes that have hidden faces — with interest and curiosity, maybe, but also with some apprehension or unease.

If I’m right, one good way to grow virtual worlds is to make avatars more like casual Halloween costumes, in which you’re able to know a little about the person controlling it. That doesn’t necessarily mean linking the avatar to the owner’s Facebook profile. (In fact I’d suggest linking avatar profiles to dating sites, like OKCupid, would be more productive than Facebook.) Halloween isn’t popular because people want to actually be Bat Man or Sarah Palin or even Pedobear — they want to express a part of their personality in a fun way, in a fun social context where others are doing the same. And above all, have this roleplay connect to the rest of their lives.

It’s a pretty loose thesis at this point, but it does chime with my own experiences in metaverse realities, namely that the anonymity and/or immersive never-out-of-character role-playing aspects that so engage the core demographics of such spaces are actively repellent to others.

I suspect business-sphere interest and investment in metaverse tech will be the necessary developmental catalyst for the sort of transparency Au is suggesting (a sort of video-conferencing on steroids, which might get popular very fast when oil prices start climbing again and flying overseas for meetings becomes an unsustainable overhead), but I also suspect that the heaviest metaverse users will always be those who find the wearing of masks to be a liberation from reality rather than a disconnect from it.

Blogging serendipity strikes again – when talking about the “Earth Brooches” from Fluid Form the other week, I made a throwaway comment about near-future costume-parties where everyone would be dressed with a photorealistic mask of whichever celebrities had licensed their faces for such commercial use (and, doubtless, a fair few who hadn’t). 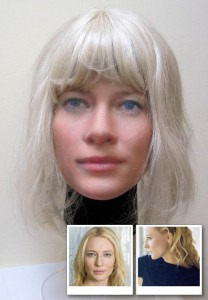 Well, turns out that wasn’t the weirdest idea I’ve ever had… or at least that I’m not the only person to have it. Via Fabbaloo comes word of a service calling itself That’s My Face!, which does exactly that – send them a couple of photos of your face (or, presumably, anyone else’s), and they’ll turn them into a 3D image before printing them off in a variety of different sizes and formats, from a full-size life-mask portrait to a custom-made posable action figure (no, really). They even offer the facility to mess with the images, changing the apparent age, gender or race of the subject.

Obviously, That’s My Face’s products aren’t going to fool the border guards of your local totalitarian state or the security systems of your rogue cybernetics corporation at the moment, but they’re a proof-of-concept for realistic full-face masks based on photographs… and another chunk chipped away from the notion of visual appearance having any solid bearing on identity. So much for photographic ID, huh?

It strikes me that with a few advances in materials as well as 3D printing, the next evolution of this technology could be a sort of non-permanent cosmetic surgery – go in to the clinic, have your face scanned, make some adjustments with the help and advice fo the friendly consultant, and then have your modified features sprayed on top of the ones you were born with. When you get bored with it, wash it off with the supplied solvent and head back for your new face-of-the-week…