Computers are made from slices of etched and doped silicon, right? Well, yeah, most of ’em are – but you can use other substances or mechanisms as a processing substrate, too. While the mechanical clockwork computer remains a fascinating and romantic anachronism in the steampunk style, how about an 8-bit microprocessor that runs on nothing other than air itself?

The complicated nest of channels and valves made by Minsoung Rhee and Mark Burns at the University of Michigan, Ann Arbor, processes binary signals by sucking air out of tubes to represent a 0, or letting it back in to represent a 1.

A chain of such 1s and 0s flows through the processor’s channels, with pneumatic valves controlling the flow of the signals between channels.

Each pneumatic valve is operated by changing the air pressure in a small chamber below the air channel, separated from the circuit by a flexible impermeable membrane. When the lower chamber is filled with air the membrane pushes upwards and closes the valve, preventing the binary signal flowing across one of the processor’s junctions.

Sucking out the air from the chamber reopens the valve by forcing the membrane downwards, letting the signal move across the junction.

Mechanical computing isn’t your only alternative, either – you can also move into the world of chemical computing. You know the “hot ice” stuff you get in those chemical hand-warmer packets? Well, not content with having already made a computer from a slime mold, one Andrew Adamatzky has been using sodium acetate as a processing substrate, with some degree of success [via SlashDot]:

The basic idea is to exploit the travelling wavefront of crystallisation to perform calculations […] So the speed of the wavefront as it moves through a Petri dish and the way it interacts with other wavefronts effectively performs computations.

Adamatzky inputs data by triggering nucleation at multiple points in parallel by immersing aluminium wires powdered with sodium acetate into a supersaturated solution in a Petri dish. He “processes” the wavefronts using blobs of silicone to steer them around the dishes and has used the technique to create AND and OR gates.

The results of a computation are determined by recording the movement of the wavefronts and analysing the edges of the resulting crystal structures.

So there’s two more potential ways of building computers that could survive the radiation levels of outer space – though whether they’d ever scale up to a useful level of power-to-size remains to be seen. I wonder what else we might use to fuel our ever-expanding hunger for processor cycles?

OK, this isn’t exactly “on-brand” for Futurismic, but I figure there’ll be enough of you who’ll react in the same way as me – by having some sort of geek-out seizure of awesomeness, in other words. 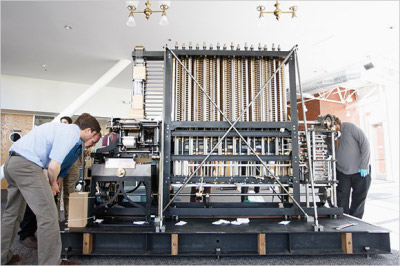 So … Wired has pictures of the unboxing of a Babbage Engine at Silicon Valley’s Computer History Museum. Be sure to wipe the drool off your monitor before continuing to surf! 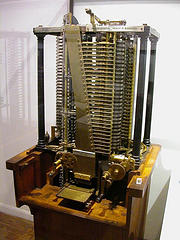 Via Bruce Sterling, we discover that a group of US physicists have produced a blueprint for a robust nanoscale microprocessor. Not such groundbreaking news, you might think – until you discover that they are entirely based on mechanical principles derived from the famous Babbage Engine, a Victorian-era mechanical computer. [Image by lorentey]

Electronic computers proliferated once semiconductors became a reliable mass-production substrate, but there are some places where electronics are too delicate to operate reliably. Which reminds me of a science fiction novel in which the military spacecraft are fitted with mechanical computers so as not to be susceptible to damage from the EMP of nuclear weapons … a big Futurismic ‘thank you’ to anyone who can remind me of the author and title.

In related news, the ubiquitous Google have added another lump sum to the annual Turing Award, the “highest award in the field of computing science” for innovative ideas.