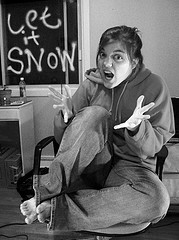 Last year Australian doctors wrote up a case of a 17-year-old Melbourne boy who was convinced if he took a drink, people would die.

The psychiatrist who runs the inpatient unit where the boy was treated, Robert Salo, has now seen several more patients with psychosis or anxiety disorders focused on climate change, as well as children who are having nightmares about global-warming related natural disasters.

It would be surprising if global warming — or “climate change,” if you will — had no effect on people’s psyches.

After Hurricane Katrina, problems like severe mental illness rose, including depression, PTSD, anxiety disorder, panic disorder, and a variety of phobias.  These rates went from 6.1 percent to 11.3 percent, among those who lived in affected regions, a 2006 study by the Hurricane Katrina Community Advisory Group said.

The rates of mild-to-moderate mental illness also double, going from 9.7 percent to 19.9 percent.

Denial, and Gore derangement syndrome, may be other symptoms.

[Let It Snow by Bah Humbug]

The American Journal of Psychiatry has officially declared [courtesy of a Wired.com article] that “Internet addiction appears to be a common disorder that merits inclusion in DSM-V [Diagnotic and Statistical Manual of Mental Disorders]”.  Yup, that’s right.  If you get angry because you missed that raid on Onyxia’s Lair, then you could very well be mentally disturbed.

The biggest problem I see with such a claim is that the basis for most of their research is from people who spend more than 23 hours a week on the computer.  23 hours?  That’s it?  This figure would include nearly anyone who works for a business that is any kind of computer-dependent (and that includes most of them if only through internal emails and the internet).  It’s one thing to use a computer 23 hours in a week; it’s another thing entirely to spend 23 hours in a day playing video games (which is the root of much of this kind of research).

It just seems like yet another blow to geekdom for people to be able to say, “well you have a disorder because you like your computer too much.”