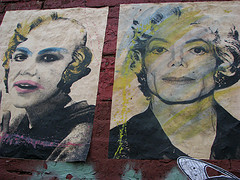 I’ve never been a fan of Michael Jackson’s music, but I have something of a fascination with his status as a larger- (and weirder-) than-life public figure… a status that his recent death will probably do little to dull, at least in the relatively near-term, and possibly forever. [image by 416style]

As such, I heartily recommend you read this piece by Brian Dillon at The Guardian: “Michael Jackson: king of hypochondria” raises the point that some of the earliest weird tales about Whacko Jacko were in fact created (or at least authorised) by Jackson himself.

When pictures of his visit to the hospital for that purpose made their way to the National Enquirer, Jackson seems to have seen an opportunity to make himself appear more enigmatic in the public mind. It was a curious change in attitude, considering his previous anguished responses to rumours about his personal life: his alleged homosexuality, his supposed decision to have a sex change in the late 70s and the initial media reports that his obvious recourse to plastic surgery was spurred by a desire to look like his mentor Diana Ross. Whatever led Jackson to court notoriety now, the ruse certainly worked; it prompted just the first and perhaps least disturbing of the many bizarre stories that would emerge about him in the years to come.

Though it was not true, the “oxygen tent” story now seems to presage so much about Jackson’s decline that it is hard not to read the image that accompanied it as an emblem of his eventual predicament: reclusive, ailing and unable to reverse his toxic reputation for eccentricity and worse. For the young man in the photograph – whose skin is still brown, whose face has changed since his early 20s but not yet taken on the inhuman aspect of his middle age, whose dancer’s body is not yet emaciated – already resembles nothing so much as a sacred or royal corpse.

Almost every book I’ve read on postmodernism cites Madonna as the quintessential self-made multi-myth, shrugging symbolic identities on and off in order to surf the Zeitgeist and keep the punters interested. That’s somewhat similar to David Bowie’s perpetual reinvention of himself as a symbol (of himself, and of other things), though I’d suggest that Bowie was less interested in being a pop sensation than exploring new avenues that interested him, with a very variable success rate (Tin Machine, anyone?)…

But Jackson just kept grafting new bits on to the same image (literally as well as figuratively), and as such became something bigger than he or his organisation could truly control. I can’t help but feel that, as such, he somehow presaged the uncontrollable runaway meme phenomenons that are such a feature of global internet culture.

Furthermore, it makes him – to my mind at least – an intensely science fictional phenomenon, as well as a postmodern one (if there’s any serious difference between those two things, which I’m less and less sure of as the days go by). The story of Michael Jackson is inherently mediated by the preconceptions of the person reading him as a text, and by the choice of references they use in that reading. The “real” Michael Jackson eventually became such a tiny and insignificant part of the maelstrom of images and stories that surrounded him that he could probably have died long before he did without costing that story any weight or momentum.

There are so many riffs to play around Michael Jackson: riffs of identity-as-narrative (and narrative-as-identity), of the power of PR and dis/mythinformation, about our willingness to believe falsehoods if they tell us what we want to hear, about the increasingly intangible border between a product and its marketing, about becoming the story you tell about yourself, and about that story mutating once it’s too big to control, about self-fulfilling prophecies, about the lonely frightened people sat at the centre of the images we create of ourselves in the public sphere.

The story of Michael Jackson is a very sad one, however it’s told and whoever it’s told by… and it’s all the more sad because his story is, to a greater or lesser extent, our story too. 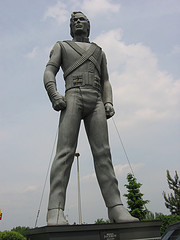 Ah, December – time to crank out the ‘silly season’ media stories to fill the gaps in between the “best of the decade” posts. So here’s a way-out weird  news article for you: an LA-based company called My DNA Fragrance (there’s a clue in the name) has joined forces with a collector of celebrity hair and started making perfumes based on DNA extracted from snippets of the barnets of superstars. [via The Daily Swarm; image by Sjors Provoost]

No, apparently this is a true story. But I hope you’ll excuse me the levity of slicing a quote from the coverage and using it out of context (purely for the lulz, you understand):

“The biggest seller is Elvis, but MJ is selling very well too. It’s a powerful fragrance and there is no alcohol in it.“

We’ll leave aside the speculations about our bizarre obsession with celebrity (after all, is this so different from touching relics of the saints and other such Medieval behaviours?), and leap instead straight to the copyright problem. What happens if my hair is harvested without my knowledge, while I’m treading the red carpet somewhere*? Don’t I or my descendants have a right to the profit from perfume based on my DNA? How many changes would need to be made to a DNA string to make it legally ‘different’ to the originating source?

And most importantly, what the hell does Eau de Michael Jackson smell like?