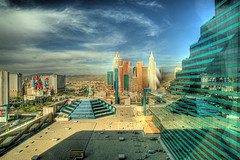 Our sf-nal brothers-in-blog over at SF Signal have managed to score an interview with the occasionally controversial but always entertaining pop-science writer Dr. Michio Kaku.

The SF Signal gang ask Dr. Kaku a bunch of questions (including what he thinks about Mundane SF, believe it or not), but what I found most interesting was his response when asked whether humans stood a chance of becoming a Kardashev Type I civilisation:

“I see evidence of our historic transition from a Type 0 civilization to a Type I civilization. For example:

But there is also a backlash against this historic transition. Anything this monumental is bound to create a counter force. These are the terrorists (who instinctively dislike a planetary civilization, which is necessarily multicultural, scientific, progressive, and tolerant). Also, we have the forces of chaos and destruction, such as nuclear proliferation and designer germs.”

So rock music is a sign of an advanced civilisation? I feel vindicated! 🙂

More seriously, it seems Dr. Kaku is cautiously optimistic about our progress so far – perhaps uniting in opposition to the “forces of chaos” will crystallise us into a Type I planetary civilisation?

That said, Karl Schroeder isn’t convinced by the Kardashev Scale – it’s inherently homocentric, meaning that what applies to us hairless monkeys is unlikely to apply to any other species. So perhaps we’re trying to classify the unclassifiable?

I love the smell of philosophy in the morning! [image by Shayan]